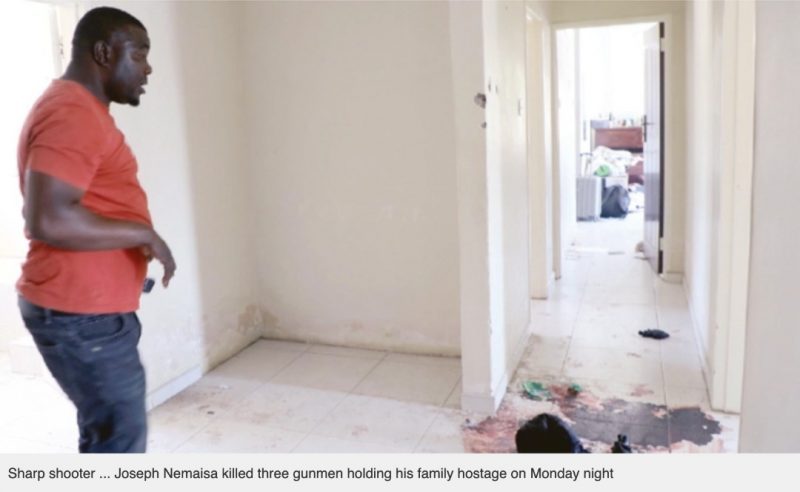 I WAS prompted to pen down this article because of the raging debate involving Joseph Nemaisa, a former police detective, who killed three “suspected” armed robbers at his home in Chadcombe, Harare.

The question most people have is whether Nemaisa should be arrested or not.

In a Herald online video interview aired on December 8, Nemaisa stated he responded to a distress call from his wife informing him that they were under attack by at least five armed robbers.

In his interview, he said he drove home, parked his vehicle some few blocks away, and proceeded to the home on a solo covert mission to stop the attack.

He mentioned that, without warning, he fired the first gunshot through a glass window, that instantly killed one of the alleged robbers.

He also talked about gunshots being fired in the house. He further tells the journalist that he also shot in the head and killed one of these invaders before the other two fled the scene.

Now, the facts that are not disputed are:

It can be argued that Nemaisa acted in a manner that has signs of self-help.

Like in “Rambo” the movie, his actions were that of a vigilante. Him being a former

As a police detective, he should have known better and informed the authority of the dangerous situation at his home.

Now let’s look at what the law says. The law describes “unlawful attack” as any unlawful conduct which endangers a person’s life, bodily integrity, or freedom (Section 233 of the Criminal Code).

The facts show that Nemaisa’s life was not in danger prior to him arriving at his home. However, from the facts, it is apparent that his family’s lives were indeed in danger.

Be that as it may, Nemaisa can rely on self-defence of his family against an unlawful attack and can succeed in court if he proves that:

The criminal code provides additional grounds on the issue of self-defense.

The Criminal Code also describes “unlawful attack on property” as any unlawful conduct which endangers or infringes a person’s property (Section 256 of the Criminal Code). The facts show the following;

Another thing to note is that the courts will take due account of the circumstances in which Nemaisa found himself in, including any knowledge or capability he may have had and any stress or fear that may have been operating on his mind.

Should Nemaisa be arrested and prosecuted?

YES! The arguments articulated above are defenses to a crime committed.

In this instance, it can be murder or culpable homicide!

Nemaisa should have his day in court to explain the circumstance he found himself and provide the defenses he has in terms of the law.

It’s not up to the police to exonerate Nemaisa but they should investigate and compile a docket and bring it before the courts of law.

Zimbabwe is a country with laws that govern the conduct of its citizens and if there is an act with elements of a crime, even though justified, the law should be allowed to apply to its full extent in order to avert anarchy.