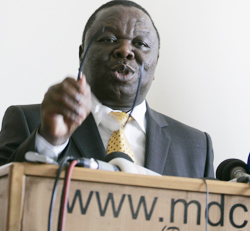 THE MDC-T is set to kick off its Policy Conference on May 17. The conference will deliberate on the policy frameworks the party will use to govern should it win the next general election. At the very least, the conference will provide us with alternative talking points to the latest bizarre paranoia with the Coca Cola packaging as the latest instrument of regime change.
Clearly some politicians need to stop stomping around like a group of stroppy teenagers and perhaps have a snicker.  With the social and economic challenges we face, it’s hard to imagine that a soft-drink company’s branding strategy is top of our agenda.
For ordinary people like us, the conference might just have brought the policy debate back to the centre. In the last few months, there has been good debate on how Zanu PF’s indigenisation policy, the MDC’s ACTION policy or the MDC-T’s JUICE will improve the lives of millions of Zimbabweans who  suffered hyperinflation, joblessness, rising poverty and a near collapse of basic services and infrastructure. Since then, the issue of candidate quality and policies has become secondary to the loud bickering of a fatigued coalition.
Why can’t we all just get along?
The electorate should hold in reverence those in public office or those seeking one, who are willing to suffer the often inglorious scrutiny of their beliefs without the arrogance of a ‘we know best approach’. The assumption that only a few in government forever hold the answers to our problems is particularly distasteful.
Although I often disagree with the Reserve Bank Governor, I am have respect for Dr Gideon Gono’s reasoned opinion and arguments on an ‘alternative indigenisation approach’ than the finger-wagging ‘agents of the West’ diatribe from those who have elevated themselves to a ‘Socrates Status’ as oracles of unquestionable wisdom. Political leaders can take the new age voter for granted at their own peril.
Any party that seeks to win my vote or that of any Zimbabwean should go away, get itself a policy and come back to tell the public what it is. After 33 years of independence, it would be the height of naivety to believe that everything wrong with our nation is entirely the West’s fault and nothing to do with our own shortcomings.
Voter of no fixed Allegiance
There are enough problems in our society that need fixing by all Zimbabweans without the need to point fingers at imaginary enemies. We must face and take ownership of our economic problems and have a clear plan on how to address them. We must devise policies that will help people deal with the issues that are important to them. Politicians must wake up to the emerging complex reality of a voter of no fixed allegiance.Advertisement

Results from the recent census point towards rapidly changing demographics of the Zimbabwean voter. More than 50 percent of the current population were born after the liberation war. Similar to trends in other African countries, the inevitable reality is that soon enough, liberation credentials will become less important as a form of political capital. The coming election might not be won on the ‘left’ or on the ‘right’ it might be won on the centre and decided by the voter of no fixed allegiance.
Does a policy conference matter?
The challenge for MDC-T and any other political parties releasing their policies ahead of the general election is how to mobilise the country behind their vision of the future? Whilst Zanu PF remains anchored on the controversial but populist indigenisation policy, the MDC-T seeks to grow a fully integrated economy through an effective democratic and entrepreneurial role of the state. The choice for the voters is to sieve through the clattering noise and determine which policies are most likely to get our people into work and cause our economy to grow.
The real purpose of a policy conference is to measure which party is closer to having a majoritarian project, a persuasive vision allied with attractive policies capable of mobilising most of the country behind them. A policy conference matters because it shows us what political parties believes in. Our concern as citizen is to choose a new breed of politicians who can make our insolvent nation solvent again and set our country back on the path to prosperity in which we can all share.
Show me your policy, I will show you my vote
After years of endless conflict, Zimbabweans deserve an economy in which all players complement each other in an integrated way to eliminate poverty and spur economic growth. To grow and transform our economy will require a state with the capacity to mobilise resources towards a common national agenda. The country needs a government which can stimulate a vibrant private sector with policies which encourage investment and growth.
Real achievement in the real world takes time, effort, perseverance, resilience. To come through the storm, to overcome the challenges we face, we must rediscover that spirit. The job for the MDC, or any other political party, at a policy conference such as this is to bring out the best in this country.
The challenge is to mobilise our people to come together, to join together, to work together as a country, to unleash and unlock the promise in all of us. Transformative policies cannot be enforced through coercion, but through consultative engagement. In a democracy, the prize is to create a country for all in which everyone plays their part regardless of whether they drink Coke or Fanta.
Dr Lance Mambondiani is a Development Economist and Guest Lecturer in International Finance & Development at a UK University. He writes in his personal capacity. Contact email lancem@btinternet.com . Twitter @DrMambondiani