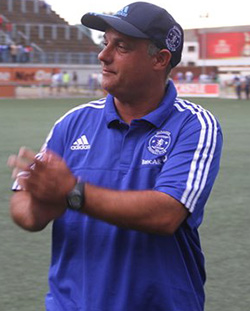 DYNAMOS’ new Portuguese coach Paulo Jorge Silva comes under the spot light this weekend as he makes the difficult trip to Barbourfields to face defending premiership champions Chicken Inn in the season opener on Saturday.
It’s a tough start to their campaign for the Portuguese mentor who has declared he was aiming for nothing but the championship this season.
He maintained this week: “We have prepared well and I am ready to face any team.
“But it will be a difficult trip. It’s a massive game. They (Chicken Inn) have a very good coach (Joey Antipas).
“I would have preferred to meet them at a later stage of the campaign because they are more prepared than us. They have been playing in the African Champions League but that is football we have to face them.”
In other matches Highlanders, also under a new coach Dutch Erol Alkbay, have a similarly tough trip to the Colliery in his first match in charge.
Alkbay takes on Hwange who have proved difficult to beat at the Colliery which they have turned into a virtual fortress in the last few years.
Meanwhile, at the National Sports Stadium on Sunday, Caps United, under the guidance of Lloyd Chitembwe who took over towards the end of last term, host Airforce side Chapungu in what is set to be an explosive contest.
Elsewhere, FC Platinum’s Norman Mapeza host Tsholotsho at Mandava on Saturday in another match that will whet the appetite of local soccer enthusiasts.
FULL FIXTURES
Friday: How Mine v Bulawayo City (White City Stadium 1500hrs SS)
Saturday: Chicken Inn v Dynamos (Barbourfields), ZPC Kariba v Border Strikers (Nyamhunga), FC Platinum v Tsholotsho (Mandava), Mutare City Rovers Vs Ngezi Platinum Stars.
Sunday: Caps United v Chapungu (National Sports Stadium), Hwange v Highlanders (Colliery), Triangle v Harare City (Gibbo).Advertisement