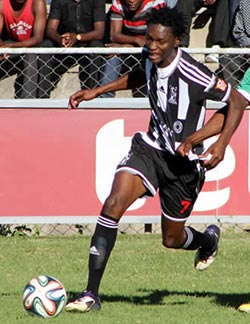 Buffaloes 1-3 Highlanders
Chiredzi 0-1 Dynamos
CHARLES Sibanda scored twice as Highlanders maintained their lead at the top of the Castle Lager Premier Soccer League with a resounding 3-1 victory over Buffaloes at Sakubva Stadium on Sunday.
Dynamos moved into fourth after beating Chiredzi 1-0 at Chishamiso Stadium via a Patrick Khumbula strike in the 34th minute.
The defending league champions have 16 points from eight games and recorded their second win in a row after controversially beating FC Platinum 1-0 in a mid-week.
But the score-line at Chiredzi did little to mask their scoring problems as they have scored only eight times in nine matches.
On the other hand, leaders Highlanders have scored 18 times, Hwange 16 and third placed How Mine 15 times.
Sunday’s win ensured that Bosso are now unbeaten in nine starts and have 19 points, one ahead of Hwange who beat Shabanie Mine 3-0 on Sunday at the Colliery while How Mine dropped to third with 17 points after dropping two points against ZPC Kariba on Saturday.
Sibanda hit the nets in the 15th minute as Highlanders took the game to their troubled opponents, who were thumped 5-1 by Triangle on Wednesday.
But Buffaloes pulled one back through former Bosso striker Jacob Muzokomba in the 47th minute.
But there was no let-up in the Highlanders attack as Sibanda completed his double in the 52nd minute.
Highlanders were however, lucky on the break as veteran defender Liberty Chakoroma beat his own keeper inside the box as he attempted to clear a Sibanda cracker from outside the box.
At the Colliery, Hwange stamped their authority in the last 11 minutes of the match, scoring three times without reply as they crushed Shabanie to maintain their fine start to the season.
Evans Rusike scored in the 79th minute to break the stubborn Shabanie Mine goalkeeper London Zulu before veteran Gilbert Zulu added the second two minutes later.
Tafara Chese then put the icing on the cake in the 91st minute with the third goal.
On Monday, which is a holiday in Zimbabwe, Harare City will attempt to move off the bottom of the log for the first time this season when they engage Black Rhinos at Rufaro Stadium.
From eight matches, City have won once and lost seven times and have three points while Chiredzi have five points after one win, two draws and five losses, giving them five points.Advertisement