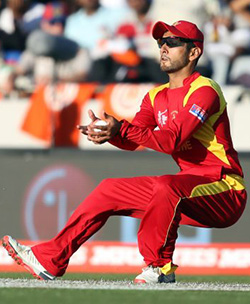 A KEY member of the Zimbabwe squad that toured Pakistan, twenty-nine year old Sikandar Raza became an instant hit with the local crowds not only due to his friendly demeanour but also due to an excellent 100 off just 84 deliveries which he scored in the 2nd One-Day International (ODI). In a sense, his innings in front of a huge crowd in Lahore was no great surprise as it was built upon an ODI career which consists of 30 matches in which he has scored 839 runs. He has also been called upon to bowl spin for his side in ODIs where he now has 8 wickets and a very respectable economy rate of 5.58.
In an exclusive interview with PakPassion.net, Sikandar Raza spoke about his connections with Pakistan, the controversy behind payments made to Zimbabwe players for their tour of Pakistan, his abiding memories of the tour of Pakistan and why he recently referred to Shoaib Malik as his teacher.
PakPassion.net (PP): Why did you leave Pakistan and chose to play for Zimbabwe?
Sikandar Raza (SR): This question gets asked a lot of times so let me make this as clear as possible for everyone. I never played any serious cricket during my stay in Pakistan and cricket was the last thing on my mind at that point in my life. I wanted to concentrate on my studies and, in fact, I wanted to be a fighter pilot! So any stories or suggestions that the PCB did something wrong to me or neglected me or I became disillusioned with Pakistan or its cricket is simply untrue.
There is nothing owed by the PCB nor do I owe anything to PCB in that regard. I did not play any club cricket in Pakistan and I had no aspirations to play for Pakistan at all. I resent these stories made up by some people for reasons best known to themselves. The truth is that my family migrated to Zimbabwe and that’s how I arrived in the country and with the Almighty’s help, have found a place in the Zimbabwe team.
PP: Considering the examples of Imran Tahir and Fawad Ahmed, do you think the concept of playing for the country of your birth is now more of a romantic notion in today’s world?
SR: Regardless of why Imran Tahir and Fawad Ahmed chose to leave Pakistan, the fact is that ALLAH had a plan for them. Once again I stress, Imran and Fawad are abused for leaving Pakistan but why cannot we accept that in the higher scheme of things, they weren’t meant to play for Pakistan? Why are there such negative connotations associated with this whole subject? I am very good friends with Tahir but he’s never spoken to me on this subject as it’s just not important. Was the Pakistan cricket setup harsh on Imran? I would not know but what we do know is that he is where he is and he is happy. It is very common to hear terms like “Pakistan born Zimbabwean batsman” or “Pakistan born South African leg-spinner” being mentioned and in a strange way, one must admit that this has brought some fame for Pakistan so it’s not all negative.Advertisement

PP: In terms of your style of play, do you draw inspiration from any particular cricketer or personality?
SR: To be honest, I fell in love with the game. So basically, I didn’t start to play cricket because of a cricketer but I started to play the game because of my interest in cricket itself. It’s not about following personalities. If a tail-ender plays a good shot then I will walk up to him and ask him how he played it or did he do anything different to get that result. If there is one person that I do draw inspiration from then that’s got to be my grandfather who taught me a lot about life which helps me in cricket as well.
PP: Hashim Amla and Moeen Ali are two well-known Muslim cricketers whose religious affiliation is no secret. Do you feel that your religion has a role to play in your game as well?
SR: Let me say that I am from a family with a deep religious background and my religious beliefs not only play a role in my game but more importantly in my life as well. However, let me also say that one cannot judge players’ religious beliefs by their outward appearance or actions, or how they appear in public or celebrate on the field. We are no one to judge any one like that. For myself, I know that religion has made me a better person all-round and then all other things in life, including cricket are the natural by-products of this belief.
PP: The Pakistan tour seems to have been a bit of a career turn around for you. How do you feel about that?
SR: To be completely honest, before going to Pakistan my career was at a point where I could have easily been out of the team. Dav Whatmore who is our coach and our selectors put their necks on the line when they backed me for inclusion on this tour. They could have easily walked away but they decided to back me up for which I will always be very grateful. In fact I am grateful to all the people who worked to help me and indebted to all who prayed for my success which includes my family.
PP: How did you feel when you walked onto the field at the Gaddafi Stadium in Lahore?
SR: The feeling was amazing! The love and support we were getting from the crowd was simply unbelievable. There was a time during the games that the whole crowd were shouting “Zimbabwe, Zimbabwe” which is really something you would not expect in a foreign land. It was beautiful to see so much support while you are away from home. When I was walking by the stands, the crowd would stand up and clap for you or there would be some eager fans wanting to say hello.
It was just fantastic and I thought to myself, wow, what an amazing reception we are getting here. Seeing this type of enthusiasm, I started to interact with the people a little more like clapping with them or even play with them for fun. All this was due to the love and support we got and I will say again, the Pakistan crowds were simply fantastic.
PP: Tell us about what transpired after the incident during the 2nd ODI? How did the team feel and what persuaded the team to continue with the tour?
SR: The fact is we weren’t sure about what had happened. We were initially told that it was a gas cylinder which had exploded but regardless of the actual reason and given the recent history of such incidents in Pakistan, we were quite close to coming back to Zimbabwe. But then we sat down together as a team and considered the fact that there were thousands of people in the stadium and a huge number of Army personnel guarding the area. The blast took place about 2 km away from us which is the start of the “red zone”.
Did we really want to overreact and walk away from this? We were here to build relations with our Pakistan brothers and also encourage more tours between our countries, did we want to throw that away? Believe me the unanimous answer was NO! We decided to honour our commitment and play the final ODI and finish the tour as planned. There was no further discussion or doubts expressed after that point.