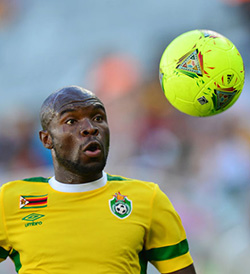 HIGHLANDERS new forward Simba Sithole says he has adjusted into the club’s system after joining the Bulawayo giants last month.
Sithole was dumped by South African side Ajax Cape Town and made his Highlanders debut in last Saturday’s 4-1 loss to Dynamos in the TM Pick n Pay Challenge Cup.
After finding home at Highlanders, Sithole is keen to repay the faith shown to him by coach Kelvin Kaindu.
“I have settled well in the team. I am a Bulawayo boy and have known Highlanders’ type of play well for long now,” he said.
“I used to play against them when I was at How Mine. I also used to watch them training so it was easy for me to adjust.
“I played with some of my new teammates in the national team. It is good that the coach has confidence in me so I will do the scoring job.”

Sithole spoke about the TM Pick n Pay loss to Dynamos and said they should take it as a blessing in disguise.
“The game was open in the first half. Dynamos just utilised their chances but we also got scoring opportunities which we blew away. That was the difference.
“This game helped us identify our weaknesses and we will make it up in the league race which we still have good chances of winning,” Sithole added.
Highlanders will this weekend turn focus on the Chibuku Super Cup where they are in the quarterfinals.