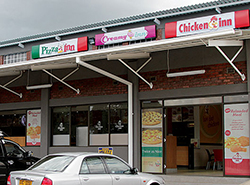 HARARE: Fast foods group Simbisa Brands says it has increased the number of counters by 10 percent in the first quarter to September and plans further expansion, locally and in the region.
Simbisa, Innscor Africa’s quick service restaurant unit, listed on the Zimbabwe Stock Exchange last November after its unbundling.
In the full-year to June it reported that it had 419 counters in 11 African markets.
Chief executive, Basil Dionisio on Friday told the company’s first annual general meeting that Simbisa has plans to open more counters, with four currently under development, two each in Kenya and Zimbabwe.
“Our number of counters have grown 10 percent quarter on quarter …. The net number of customers have increased by 4 percent quarter on quarter,” he said.
Revenue and headline earnings were also up marginally, Dionisio added.
However, liquidity constraints and poor economic conditions in Zimbabwe, which is the group’s  largest market,  had negatively impacted on average spending.
“We note that the average spend for the same period was down 12 percent mainly due to the deteriorating macroeconomic conditions in our largest market Zimbabwe,” said Dionisio.Advertisement