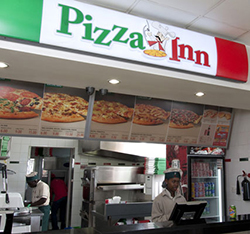 SIMBISA Brands has announced it is looking to trade trading on the London’s Alternative Investments Markets (AIM) once it receives central bank, other regulatory and shareholder approvals.
The company, which is used to be under Innscor Holdings, separately listed on the Zimbabwe Stock Exchange end of 2015.
The London move is aimed at raising funds to expand the company’s already huge stake in the Zimbabwean fast foods industry as well as outside the country’s borders.
AIM is a sub-market of the London Stock Exchange that was launched on 19 June 1995. It allows smaller, less-viable companies to float shares with a more flexible regulatory system than is applicable to the main market.
Simbisa operates some of the popular food outlets in Zimbabwe such as Pizza Inn, Chicken Inn and South African franchises Nandos and Steers.
The company boasts of 193 counters in Zimbabwe and 205 counters outside the country, with a presence in Zambia, Kenya, DRC, Ghana, Malawi, Namibia, Botswana, Mauritius, Swaziland and Lesotho.
According to the statement released Monday, approval for the UK listing from the board of directors has already been received.
“Shareholders are advised that the Simbisa Brands Limited Board of Directors has approved, subject to Reserve Bank of Zimbabwe, other regulatory approvals and shareholder’s approval, the application for a secondary listing of Simbisa’ Ordinary Share Capital on the London Stock Exchange Alternative Investments Markets (AIM) in order to access additional funding for the Company’s expansion,” reads the statement.
“Further to this expansion initiative, shareholders are also advised that Simbisa is currently in negotiations for the acquisition of an international complimentary business.”
The group’s revenue went-up by 3 percent from $77 million to $79, 1 million in the previous year. Operating profit rose by 3 percent from $10, 2 million in the same period previous year to $10, 4 million.
The group plans to increase its footprint both in Zimbabwe and the region as it pursues growth opportunities in its largest regional market, Kenya.Advertisement