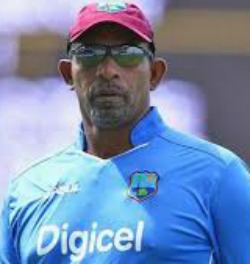 Phil Simmons has now been to Zimbabwe twice since acrimoniously leaving his post as the country’s cricket coach back in 2005.
The Trinidadian first returned five years ago as head coach of Ireland for a brief ODI series. He’s back again as coaching consultant for Afghanistan, who are hoping to tap into his wealth of experience and inside knowledge of the Zimbabwean team culture during the five-match ODI series beginning on Thursday.
It’s a smart move by the cricket board of the war-torn country. Simmons, now 53, has also coached Ireland and his native West Indies. Afghanistan will play both teams after the Zimbabwe tour, and Simmons will also be part of the staff in those series.
Simmons’ short spell as Zimbabwe’s coach ended in an ugly fallout with the cricket board.
He had inherited a hugely inexperienced new squad thrown in at the deep end following the infamous sacking of 15 “rebel” senior white players in 2004. With Zimbabwe cricket torn apart by infighting in the aftermath of that rebel saga, Simmons got himself, rather naively, enthusiastically involved in a bitter fight against the new power base of the game – remnants of which are seen in the game today.
He paid the price when his contract was terminated by Zimbabwe Cricket (ZC) in 2005. Even as 30 players signed a petition demanding his reinstatement, the new power-brokers in ZC were having none of it. Simmons’ time in Zimbabwe was up. He would leave the country some five months later to pursue his legal battle from his home in London.
In court papers contained in the labour dispute that’s still unresolved 12 years on, Simmons’ attorneys claim someone inside Zimbabwe (ZC) had approached immigration authorities trying to have their client deported out of the country.
Despite acrimonious circumstances of his departure, Simmons is still noticeably nostalgic about the time spent in Zimbabwe.
“No problem, let’s talk at the CFX on Monday during the warm-up game,” he says to me when we met last Saturday.
No one calls it CFX anymore. That name has fallen off over the years. When Zimbabwe was in its last years of good health, it was called the CFX National Cricket Academy after its chief sponsor, a thriving commercial bank that has since folded.
Situated in one of Harare’s plushest suburbs, the CFX Academy was a beautiful state-of-the-art facility, as good as any in the rest of the cricketing world at that time.Advertisement