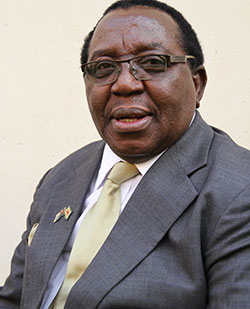 A DISPUTE appears to have arisen regarding the legal status of the 6th Zanu PF congress with former Secretary of Administration, Hon. D. Mutasa, maintaining that the gathering and resolutions passed are of no force and effect and Hon. SK Moyo, Zanu PF Secretary for Information & Publicity confirming the generally held view that the bus has left the station without a few of its former conductors.
It was Jefferson in a letter to James Madison dated 30 January 1787 who said: “I hold it that a little rebellion now and then is a good thing, and as necessary in the political world as storms in the physical.”
He went on to further state that: “Unsuccessful rebellions indeed generally establish the encroachments on the rights of the people which have produced them. An observation of this truth should render honest republican governors so mild in their punishment of rebellions, as not to discourage them too much. It is a medicine necessary for the sound health of government.”
Although it is politically convenient to describe the actions of former VP Mujuru & Co as some form of rebellion, the fact that the rights of the people fingered have been affected, in the absence of any better explanation, it would be safe for analysts to pause and reflect on the forces at work.
Who is the last man standing?  It cannot be argued that SK Moyo was the last person to be elected to the position of Chairman of Zanu PF.  He is the only Chairman of the party since the Unity Accord to be demoted to the lesser position. His two predecessors were elevated to the position of Vice President. When Zanu PF chose to displace the former Speaker of Parliament, Hon. Lovemore Moyo, SK Moyo was the man chosen for the job on account of his seniority in the party.
After the death of former VP John Nkomo, there was a general expectation that SK Moyo would also be promoted. However, he could not automatically assume the position of Vice President as in terms of the party’s constitution, this position could only be filled at an elective congress. His appointment after the 2013 General Elections to the position of Senior Minister by President Mugabe was also an indicator that, in the eyes of President Mugabe, SK Moyo was a senior cadre of the party.
The existence of the top four positions in the party being the only positions in the Politburo that only an elective congress could create was common cause. Indeed, President Mugabe was not the only person elected to the position.  SK Moyo by virtue of his position in the party was until the 6th Congress, the third most senior person in the party. He was a de facto Vice President and Hon. Mutasa, who as the Secretary of Administration, though unelected, assumed that he was the fourth most senior person in the party.Advertisement