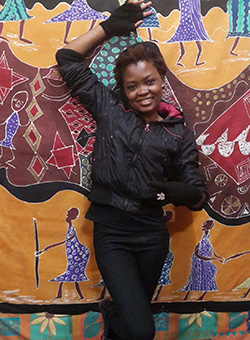 A PRINCESS is often associated with nobility, selflessness, faithfulness, kindness and above all compassion. A princess is often part of the royal family, the elite in society. She lives opulence and indulges in the finest things that the world can offer, often at the snap of a finger.
Sandisiwe Dube, 22, an emerging female musician from Bulawayo describes herself as a princess. She does not belong to any royal family but she believes she was born to be the princess of the music industry.
The music industry in Bulawayo has bemoaned the dearth female musicians. Some of those who have taken up the challenge have either fizzled out or have changed trade.
The Kasi Princess (TKP), as Dube is known in the music industry, has a firm belief that she has what it takes to be the torch bearer for the female artists and inspire a new generation to take up music as a career.
She recently sat down with NewZimbabwe.com and below is an excerpt of the interview.
Why did you choose TKP as your stage name?
I decided to go with that name because in as much as I come from the high density suburbs I believe I belong to the elite group. I am one of those people who wants to make a difference. In as much as I come from the ghetto, I am a princess and I want to change people’s lives.
When did you discover your love for music?
I wrote my first song when I was 11 years old. A year later I tried to audition for the school choir but I was told I was hopeless. I was really disappointed and I gave up on music for a while but at the back of my mind I knew I was born for the spotlight.
What type of music do you do?
I’m into House music but I can do basically anything. I have done Hip Hop and I have also collaborated with artistes who do Jazz and Afro Soul.
Have you released any projects?
I released a six track EP (Extended Play) in 2013 titled The First Lady of Zim House.
How did you land your recording deal with Afro Platinum Music of South Africa?
I linked up with a producer called Dj Wexey and recorded a few tracks with him. People fell in love with one of the tracks I recorded with him. Wexey was so impressed with the quality of the tracks and we ended up working on more projects together.Advertisement

I then met Babongile Skhonjwa by chance and he was impressed with my music. He then linked me up with a Zimbabwean known as Reason “Rizla” Sibanda who is based in South Africa and owns a recording label. Rizla was in the country scouting for talent. He sampled my stuff and he decided to sign me.
All the songs were recorded in Zimbabwe and then we sent them to South Africa for mixing and mastering.
What has been the reaction from the listeners?
Two of my tracks, Ndoyenda and Phumilanga, have done very well and have received a lot of airplay.
Is there any difference between Zim House music and that of any other country in the world?
What I was trying to do and I was successful at war to pioneer a new genre in Zimbabwe. If you look at my EP I have tracks like Ndoyenda which has a Zimbabwean feel to it. Mine is a bit different from South African house music, for instance, because I make music that your normal Zimbabwean can relate to.
Who were your major influences musically?
Growing up, I used to listen to Zola (South African musician) and my favourite song of all time is Stars by him. I used to hang out a lot with boys and we would play music by Zola, Bricks and Mandoza. Years later I fell in love with Teargas (South African Hip Hop group).
Since you come from the ghetto, do you project the ghetto lifestyle in your music?
One thing about me, which contributed to my career is the kind of dreams I have. The only thing I can say I adopted from the ghetto is the dressing. If you listen to my music, I do not talk mostly about the negative things that happen in the ghetto but I use my music to inspire people that even though you come from a poor background you can still achieve your dreams. I want to touch people’s lives and show them that you can be anything that you want to be despite your background.
What differentiates you from any other female musician in the country?
I don’t want to be just another artist. I dream of running an orphanage and a school of arts. I know where I am going and I wake up every-day inspired by the likes of the late Princess Diana; she did a lot humanitarian work. She might have been embroiled in scandals but she still managed to rise up and fulfil her dreams. Even after she passed away she left behind a legacy and some of her projects are still ongoing.What can we expect from TKP in the next few years?
I want to concentrate more on my music and push my brand. I might be releasing a single very soon and an album will follow.
Which artists in Zimbabwe and Africa would you like to collaborate with?
In Zimbabwe I would like to work with Oliver Mtukudzi, I admire and look up to him so much. I am not sure who I would like to work with in Africa but I want to grow to a level that people all over the content would want to collaborate with me.