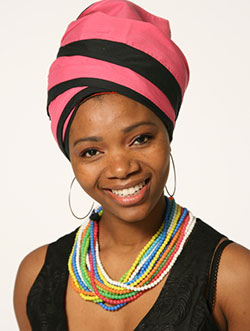 AS a talented musician, successful businesswoman, ambassador for her country, festival organiser, campaigner on behalf of orphaned and disadvantaged children and a mum-of-two, Anna Mudeka may seem nothing short of a super woman.
Norwich Evening News’ Kate Scotter discovered how she balances her demanding schedule with family life.
It has been a whirlwind year for Zimbabwean musician Anna Mudeka – just weeks after she was named as the most influential women in business and government in Africa, she has now been shortlisted for a Mum of the Year award.
The double recognition highlights the contribution she has made to people’s lives both in Africa and  here in the UK where she has lived since 1994.
Growing up in Zimbabwe with her sisters and her parents Evelyn and Alexander, Mudeka, now based at Southburgh near Dereham, has always had a passion for music.
She was performing by the age of six and by the time she was 14, she was performing live.
Back in Zimbabwe, however, it was difficult for women to become musicians.
Nevertheless, she took great inspiration from her grandmother Anna, affectionately known as Grandma Mudeka, who was a drummer and singer herself and taught Mudeka and her sisters to play music and be proud of their culture.
It was when Mudeka was just 18 that the opportunity arose for her to move to the UK and to study music at City College Norwich.
Since coming to Britain, where she has lived in Norwich, London, Watton and now Southburgh for the last seven years, she has not only become a successful musician with her own music company but she has also set up the Mudeka Foundation to fund education for AIDS orphans and disadvantaged children in Zimbabwe and has her own music festival, the Southburgh Festival, to raise funds for the cause.
The foundation aims to provide AIDS orphans and disadvantaged children in Zimbabwe with an opportunity for an education.
It was when Mudeka lost her own mum in 2001 that she was inspired to help children back home.
“I visited my old primary school and felt I really needed to do something,” she said.
“I collected school education equipment to send over in a container. It took a long time to arrive but when it did, people were so grateful; so grateful of so little.
“The headmistress at the time gave me the wake up call – because of HIV, children have become orphans and it’s a burden on their extended family members to feed and clothe them and to pay for them to go to school.”Advertisement

The numbers of children supported by The Mudeka Foundation, which became a registered charity in 2011, has grown from 10 to 40 across three primary schools and one high school.
Mudeka plans to return to Zimbabwe next spring to help rebuild a high school for which the foundation fundraised this year.
“I feel bad we are only supporting 40 but that number will go up and more children will have that opportunity,” she said.
“Even if just one child out of those ones we support ends up being what they want to be, we will have achieved so much.”
It was a chance conversation that led to the Southburgh Festival, a key fundraiser for the Mudeka Foundation, being launched in 2009.
The July event has now been held five times in the village, near Dereham, and this year was the biggest, held over three days, and attracting 500 people, some of who travelled from as far as Scotland and Belgium.
Anna Mudeka Band – Side of the Angels