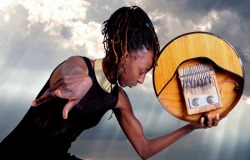 TALENTED afro-fusion singer and mbira player, Hope Masike, said it is high time that many female musicians led their own bands instead of being content with working as backing vocalists.
Known to her fans as ‘The Princess of Mbira’, Masike leads her own band Kakuwe which she formed in 2007 and has toured many African and European countries.
The NAMA Outstanding Female Musician winner (2012) said she was able to make it and be judged as a musician and not a female vocalist because, during her first time on stage, she gave the audience value for their money.
“It also has to do with how you package your act, and I believe from day one the audience liked it, so the reception was good,” she said.
“And that always put me under a lot of pressure to do much better every time when I am on stage,” added Masike.
On why Zimbabwe has fewer female musicians leading their own bands, Masike said it takes a lot of perseverance and self-belief to make it in the field.
She said, “It’s not bad being a backing vocalist, but it takes a lot of commitment to lead a band, hard work and the will to reach the greatness.
“We have quite a number of female musicians that have led bands in the country and sometimes it’s better to make a date with them and share their experiences.
“But some may have stopped singing for one or two reasons but like any other sectors it needs commitment and the will to reach the sky.
“Quite a lot of female musicians are talented and can write and sing their own songs, but some usually want to do so after a fall-out with their employers. That is like using more emotions than your talent.”
On how the society views female musicians, Masike said, “We are a mere reflection of the society and the only difference is we are always on the spotlight and what we do comes out more than what any other ordinary person does.”
“If you say female musicians are drunkards, society is full of drunkards. But that perception in my view is changing.”
The Princess of Mbira is a music graduate from the Zimbabwe College of Music and is also a fashion designer and a painter and has taught Mbira music in Europe.
She also remembers well when she was invited to perform at the then Book Café after the departure of the late Chiwoniso Maraire for the United States of America.Advertisement

Since then she has not looked back and has performed at many festivals alongside great musicians.
She has also collaborated with Aniken Paulsen from Norway, Ibou Cissok of Senegal and from Mozambique with Sheila Massungue and Anthony Maina from Kenya.