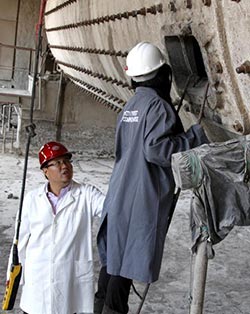 A LEADING Chinese-Zimbabwean joint venture is on track to complete a massive facility upgrade with 5 million US dollars invested by the Chinese share-holder, a senior company official revealed.
After the upgrade, expected to be completed in the next few months, the Sino-Zimbabwe Cement Company will become one of the country’s top cement producers, said Wang Yong, the company’s managing director.
“We are now halfway through the upgrade,” Wang told Xinhua last week at the cement plant located in the mineral-rich Midlands province.
“We have installed a modern bag filter system to cut emission. No more thick dusts or smoke from the chimney now.”
Wang said close to US$1 dollars was spent on improving pollution control while the rest of the money was being used to refurbish cement mills, rotary kilns, build a cement warehouse, and install new packaging lines.
After the upgrade, the cement plant’s clinker output is expected to reach at least 200,000 tons a year, nearly twice the output of 2013.
The plant, which started operation in 2001 is a joint venture between Industrial Development Corporation of Zimbabwe and China Building Material Industrial Corporation for Foreign Econo-Technical Cooperation with an initial investment US$54 million dollars.
The factory employs more than 400 workers, with 95 percent from Zimbabweans, manning almost all ranks of positions from assembly line workers to senior managers.
Wang said as part of the facility upgrade, the board of the company decided to restructure the work-force by recruiting 32 local skilled workers to replace 59 under-skilled workers who would be offered retrenchment packages.
He explained that the retrenchment was different from similar actions taken by the country’s struggling manufacturers, which are forced to close or scale down operations due to bleak economic outlook.
“We are optimistic about the future,” Wang said, adding they would redouble efforts to attract larger investment from China to fund further facilities upgrades and even expansion.
Wang said cement suppliers were poised to benefit from increased infrastructure developments, if the government’s five-year economic plan is being fully implemented.Advertisement