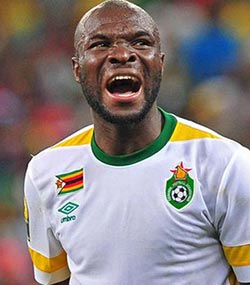 ZIMBABWE international Simba Sithole could not hide his delight after putting together the final details of his transfer to Ajax Cape Town.
Simba was a stand-out performer at the recent African Nations Championship, where he lead the Warriors’ attack under former Urban Warriors coach Ian Gorowa, helping them to a fourth-place finish.
PSL outfit Ajax have since been quick to snap up the talented playmaker, with the swift moving coming as a most welcome surprise to the 24-year-old.
“I give credit to Gorowa. He gave me a chance to shine in the national team and look now I have moved to greener pastures,” Sithole told the club’s official website.
“I am really looking forward to a fruitful stay at Ajax Cape Town and I will continue working hard.”
Despite coming under-fire during the group stages after missing a glut of goal-scoring chances, the Urban Warriors saw something in the former How Mine marksman and offered him a two-year contract.
Sithole admitted that he was taken aback slightly by the deal, but was enthusiastic about his chances at the Ikamva-based outfit.
“To be honest, I never saw this (signing for Ajax Cape Town) coming,” he continued.
“It is rare for someone to get an opportunity like this because I never went for trials and they just snapped me like that. I really thank God.
“Every time I went onto the field during the CHAN tournament what I wanted was to help the team win at all costs, unfortunately or fortunately I only managed to score a single goal when we beat Burkina Faso 2-1.
“I think Ajax Cape Town was impressed with my work rate in the national team when I played as a lone striker and managed to keep defenders on their toes throughout.”
Sithole scored his only goal of the tournament in Zim’s only victory in the group stages, when they beat Burkina Faso to secure their place in the quarter-finals.