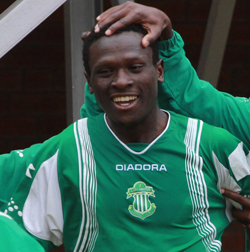 STRIKER Simba Sithole has been ruled out of Sunday’s 2014 World Cup qualifier against Egypt at the National Sports Stadium due to a knee injury.
This was confirmed by team manager Sharif Mussa, who said coach Klaus Dieter Pagels will not call in any replacement.
Sithole, who turns out for Supersport United in South Africa, also missed the 2-1 loss to the Pharoahs in March in Alexandra and will also miss the June 16 qualifier against Guinea in Conakry. It is hoped though that he will be fit for the last home qualifier against Mozambique on September 6.
Also missing from Tuesday’s training session at the National Sports Stadium was Ajax Cape Town star Khama Billiat who was expected on the night flight from his base.
Captain Denver Mukamba led a cast of internationals who included German-based Knowledge Musona, Abbas Amidu, Rodreck Mutuma and Washington Arubi, in addition to the local contingent, in Tuesday’s session.
Pagels conducted the session with the assistance of Lloyd Mutasa and Under 23 mentor, the legendary Peter Ndlovu and goalkeeper’s Nkululeko Dlamini. The session started on Monday night when the Warriors watched a video of the 2-1 loss in March.
“We were looking at the mistakes we made in that match and we are looking at rectifying that. I hope by Sunday the team will be ready to fight for Zimbabwe. We still have a lot to play for and we will give it the best,” Pagels said after the morning session.
Meanwhile, all was not rosy in the Egyptian camp on Tuesday ahead of their friendly match against Botswana after coach Bob Bradley dropped a number of veterans from his team.
It started when Bradley omitted  Al Ahly player Sayed Moawad despite his good performances with his team, prompting the player to say “the technical staff don’t like me, and I don’t like them either”.
Veteran player Ahmed Hassan who led Egypt to win with the three AFCON titles under leadership of Hassan Shehata said “I am doing good with my team Zamalek in the Egyptian league and African Champions League and yet I find myself out the Pharaohs squad and I can’t believe that”.
On the other hand the head coach Bob Bradley was angry after rumbling from the players and said at the EFA press conference “They are not professionals. I am the head coach here, and I pick and drop players”.Advertisement

“They didn’t respect their teammates. They have to support the team and not attack us. I bear all responsibilities and I know called the best players in Egypt,” Bradley added angrily.
Zimbabwe, with just one point from three matches, must win all of their final three fixtures to stand a chance of winning Group G and going into the next stage of the qualifiers.