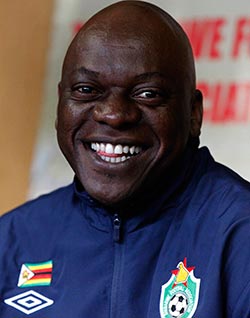 THE Warriors success at the African Nations Championships (Chan) tournament has seen six countries jostling to play them on March 5 – a day set aside by world soccer governing body (Fifa) for international friendly matches.
The day will be an opportunity for Ian Gorowa to continue the process of building a strong Warriors squad ahead of the 2015 African Cup of Nations campaign.
Libya, Dubai, Malawi, Rwanda, Botswana and Gabon have all written to ZIFA seeking to play the Warriors.
ZIFA has in the past come under fire for failing to capitalise on international friendly dates which give coaches an opportunity to try players that can represent the country in competitive encounters.
But Zifa communications manager Xolisani Gwesela said this was now a thing of the past.
“As I speak we have received letters from six countries – Gabon, Libya, Malawi, Botswana and Dubai who are willing to play us on March 5- a day reserved for international friendly matches by Fifa.
“We are currently looking at various logistics required to play any one of these countries. We will inform the football fraternity in due course the country we are going to play,” said Gwesela.
Under the current qualifying format, Zimbabwe will first have to progress from a preliminary round qualifier before battling for a top two finish in the group stage.
The Warriors’ opponent in the preliminary round will be decided at a draw to be held in Cairo on the 27th of April.Advertisement