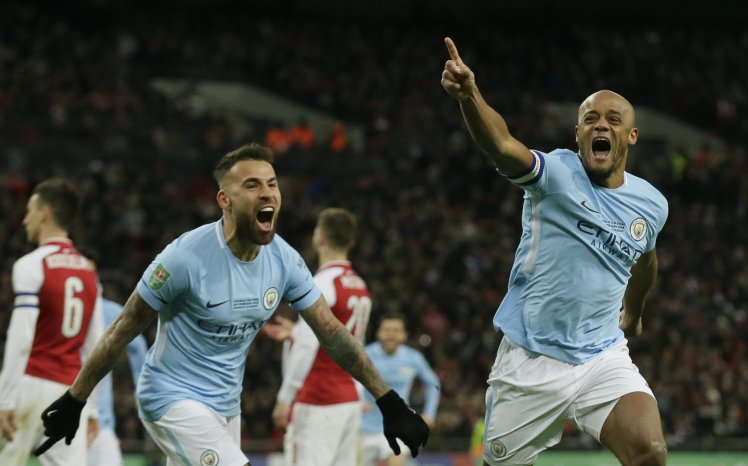 Pep Guardiola’s League Cup triumph against Arsenal could usher in an era of dominance for Manchester City but he had three veterans to thank for a comprehensive win at Wembley.

City were not at their best in a scrappy first half on a bitingly cold February day on Sunday, failing to hit the exalted heights of their football earlier this season.

The highlight of the opening period was a bizarre opener for Sergio Aguero, who netted his 199th goal for the club direct from a punt down the field by City goalkeeper Claudio Bravo -– a rare route-one goal for a side renowned for their intricate football.

But it was men against boys after the break as City totally dominated a disappointing Arsenal side, cantering to a 3-0 win with further goals from an ecstatic Vincent Kompany and David Silva.

The League Cup may seem like small fry to a man with a glittering CV that includes two Champions League triumphs while in charge of Barcelona and a clutch of league titles with Bayern Munich.

But an emotional Guardiola knows that winning the first silverware is crucial to infusing his runaway Premier League leaders with the belief to go on and win bigger prizes.

“It’s important,” said the Catalan. “We’re so happy, and big congratulations to all of Manchester City, and our fans. This trophy is for Manchester City and not for me.

“The first half was not good but in the second half we played really well,” he said.

“We were in the second half like we have been so far (this season) so of course big congratulations for all Manchester City.

“That’s why it’s important to win titles because it’s going to help us win the next games in the Premier League.”

City saw their dreams of an unprecedented quadruple shattered just six days before the Wembley final when third-tier Wigan dumped them out of the FA Cup.

But a 13-point lead in the Premier League means they are champions-elect and they have one foot in the Champions League quarter-finals after a 4-0 victory against Basel in the first leg of their last-16 tie.

Guardiola said although winning his first trophy at the club means a lot to him personally, he is just a chapter in City’s history.

He knows that for all he has reshaped the club in his image, it was three veterans of City’s defining 2012 Premier League title triumph who delivered the goods at Wembley.

Guardiola said Aguero, Silva and Kompany were three legends who had helped turn the club from perennial under-achievers into regular trophy winners, capable of going toe to toe with the heavyweights of Europe and challenging regularly for honours.

“They help us to understand what it means for the club because they won titles, they put pressure on us to continue to win titles,” he said.

“If we are able to win more titles in the future the people who are coming here, they have to know here you have to win titles and that’s why it’s so, so important.”

A relaxed-looking Guardiola thanked the club’s hierarchy for sticking with him during a barren first season at the helm of the club last year, when many questioned whether his “pure” brand of football would work in England.

He admitted he had imposed heavy demands on his players but said he never doubted himself.

Manchester City midfielder Kevin De Bruyne, one of the standout players in England this year, said the sky is the limit for the club.

“We have had a good season already, and now we need to keep going,” he said. “We have this one in the bag and now we have to maintain the same focus in the Premier League and the Champions League.

“The potential for this club is amazing, and the way we play is probably one of the best in the world.”