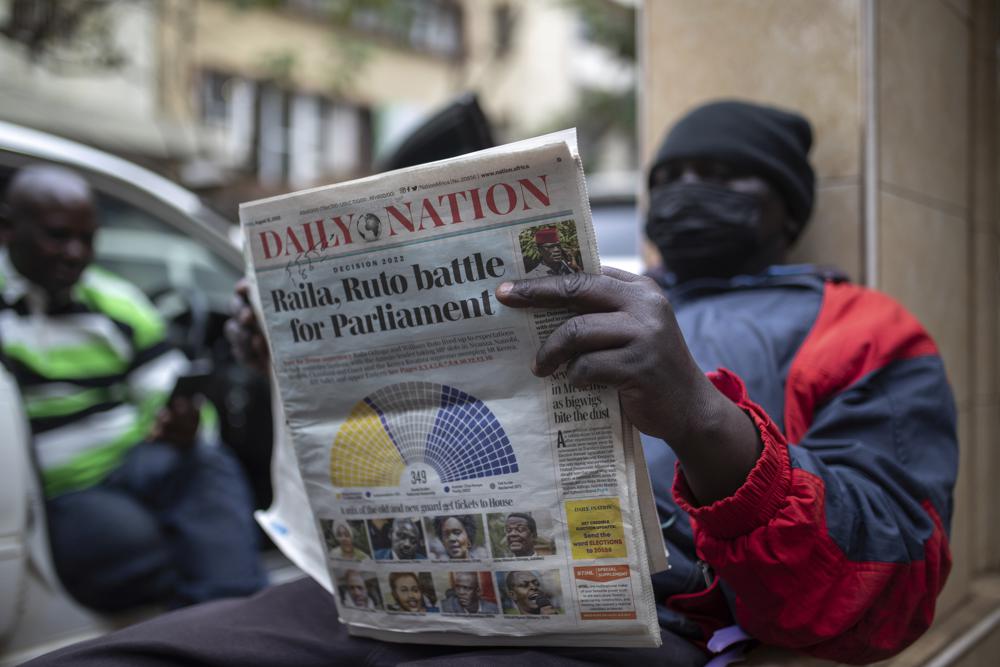 Differing tallies by media outlets fed anxiety as longtime opposition leader Raila Odinga, backed by former rival and outgoing President Uhuru Kenyatta in his fifth attempt at the presidency, was in a race with Deputy President William Ruto, who fell out with the president years ago.

Three days after Tuesday’s vote, Kenyans wondered whether the presidential election would go to a runoff for the first time.

The head of the government-created Media Council of Kenya told The Associated Press that “no one has asked anyone to stop” their tallies, but added that “we want to align the numbers with each other” and “I think let’s peer review our numbers.” David Omwoyo was going into a meeting with media leaders as he spoke.

With no clear winner emerging and perhaps days more to wait, social media hummed with unverified claims by both candidates’ supporters, which rights groups called dangerous in a country with a history of political violence.

Even the official count was sluggish, adding to impatience. “We’re not moving as fast as we should,” electoral commission chair Wafula Chebukati said.

That surprised a senior electoral expert who has observed the election and told the AP that “looking at things right now, they should have no problem finishing by the constitutional limit” of seven days after the vote. The expert spoke on condition of anonymity without authorization to speak publicly.

“You want to move as fast as the speed of trust,” the expert said, adding that “this is going much smoother than we anticipated, and that’s a good thing.” They suggested posting a spreadsheet to make it easier to see the numbers from the more than 46,000 results forms posted from around the country.

The public posting of the forms was meant to be a groundbreaking exercise in transparency for the electoral commission, which is under pressure after the high court cited irregularities and overturned the results of the previous presidential election in 2017, a first in Africa. Kenyatta won the new vote after Odinga boycotted it.

The commission chair even appeared to tease local media houses a day after the election, saying they were “behind” in tallying.

But transparency “is also a double-edged sword if caution and responsibility is not exercised,” the Kenya Human Rights Commission said Friday, saying the various media tallies without explanation have caused “anxiety, fear, unrest and in extreme cases, violence.” Meanwhile, social media is “awash with false information,” it said.

The media council on Wednesday noted “growing concerns” about the varying tallies and said it was consulting with media owners and editors “to find an urgent solution to this to ensure Kenyans receive synchronized results.”

But their slowdown brought criticism. “For media to be silent and opaque on their own counts and why they’ve stopped is yet another betrayal of their duty to Kenyans,” cartoonist and commentator Patrick Gathara tweeted Friday.

The editor of the Nation media group, Mutuma Mathiu, published a commentary saying the slow count has given rise “to a whole raft of conspiracy theories and complaints” and adding that “media occupy different positions in relation to political interests.” He cited the need to remain independent and do accurate work.

Ochieng Rapuro, the editorial director at the Standard group that includes the Kenya Television Network, told the AP that stopping “is our own decision. We have finished tallying, but given the murky fights around the outcomes of our elections, we have decided to stand on the side of caution.”

The editorial director with the Citizen media group did not respond.