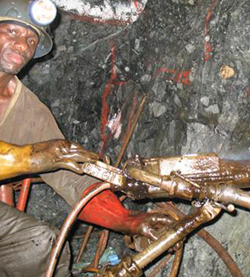 THE Gold Miners Association of Zimbabwe says it has secured a US$20 million capital injection from local banks to improve the industry’s capacity utilisation.
Zimbabwe’s small-scale miners say they require at least US$100 million for recapitalisation and to boost production.
According to the mines ministry, the small-scale miners contributed 30 percent of the total 13 tonnes of gold produced in 2012.
The capital injection confirmed by the gold miners association at their recently held annual congress in Kwekwe will be used for the purchase of machinery required to increase output.
Gold Miners Association of Zimbabwe Secretary General, Clement Makanya said the financial deal is a major boost to the small scale gold miners who have been facing viability constraints as they were operating informally.
The miners association has put in place measures to formalise all its mining operations to improve accountability of gold ore and plug revenue leakages through smuggling and other informal channels.
Small scale gold miners accounted for 65 percent of total production in the first six months of the year. Producers have set a target of 17,000 tonnes this year.
The Minerals Marketing Corporation of Zimbabwe said it expected mineral receipts to increase by about 500 percent in the next five years to US$6 billion from the current US$1,2 billion.
The State-run minerals marketing agency noted that it was currently in the process of engaging with small-scale miners to ensure that it meets its 2018 target.
Electricity shortages, exorbitant mining levies and punitive policies are also having a negative impact on production.
Government last year raised the pre-exploration fees for most minerals by as much as 8 000 percent to discourage speculative holding of mineral claims which had become prevalent.
Nonetheless, the fees and levies were reviewed in March as government tried to accommodate the small-scale miners.
Zimbabwe has the world’s second-largest deposits of platinum and ferrochrome after neighbouring South Africa and also has large reserves of diamonds, gold, nickel, copper and coal.
However, despite its reputed mineral wealth, Zimbabwe has not always been top of the list as an investment destination for mining companies.Advertisement

Industry observers say this is due to a perceived unattractive operating environment coupled with inadequate infrastructure, the government’s failure to listen to miners’ suggestions and of late, the controversial indigenisation law.