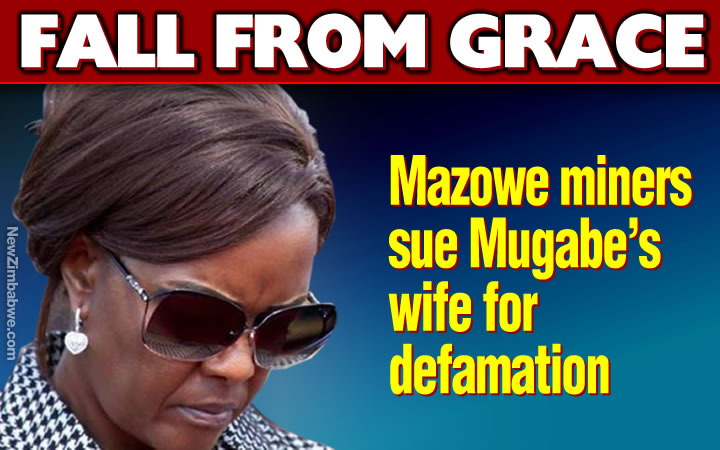 FORMER First Lady Grace Mugabe who is entangled in a fight over mining claims at Smithfield Farm in Mazowe is to be sued for defamation of character by the artisanal miners whom she has accused of stealing computers at her orphanage home in the district.

According to directors of Mondo 4 Mine Claims’ at the farm, Philip Makanya and Shepherd Muzvigo, “the former First Lady last week made a false report at Mazowe police station implicating them in the theft of 31 computers.”

Makanya and Muzvigo told journalists during a press conference in Harare on Tuesday that police investigations revealed only eight computers were missing and the suspects had already been taken to court long back claiming one of them is out on bail and the other has been convicted serving a jail sentence.

The miners also claim Grace Mugabe has been interfering with their mining operations resulting in them losing an unspecified amount of money since 2014 when her son Russell Goreraza invaded the farm for mining purposes.

“We are legal miners at the Smithfield Farm. Our concern is that Grace Mugabe has invaded the farm through her son Russell Goreraza. We are saddened by her lies that we stole from her orphanage home and abused children at her school.

“We are law abiding citizens. A court interdict in January 2018 barred her from interfering with our mining activities at the mine but, Grace has disregarded this court order.

“Today we are suing her for defamation of character. As we speak, our lawyers are busy preparing the papers to serve her before end of day or tomorrow (Wednesday) morning,” said Makanya.

Papers seen by New Zimbabwe show certificate of registration under Mines and Minerals Act belonging to the artisanal miners as well as the interim relief granted by the High Court barring Grace from interfering with mining operations.

The small scale miners said they were informed the farm had been taken by the former First Lady leading to them approaching the courts.