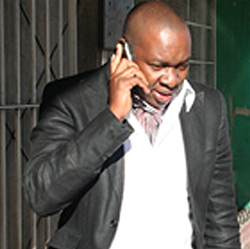 PROMINENT TV and radio presenter, Tichafa Matambanadzo, better known as Tich Mataz on smuggling charges had his case postponed to March 13 pending his trial.
Matambanadzo landed himself in trouble after he dodged $538 duty for various clothing items he bought in China recently.
He is out on $100 bail.
According to the state, the incident occurred on January 7 when he arrived at Harare International Airport aboard Kenya airways.
When he arrived at the immigration post, Matambanadzo took the green route and was approached by a Zimra official, Patrick Mukanganwi who directed him to the red route.
The green route is used by travellers who are not carrying restricted goods.
Court heard the officer handed him to another official who was manning cubicle 3 of the red route.
The officer gave him a declaration form before he went through Matambanadzo’s goods which comprised of several suits, track suits and shirts among other things.
The teller briefly left Matanadzo going to next cubicle to capture the information in their system.
When he came back Matambanadzo had vanished.
The state alleges that Zimra suffered a prejudice of $538, 75 as a result of his actions.
Magistrate Lazini Ncube is presiding over the case.
Francesca Mukumbiri appeared for the state.Advertisement