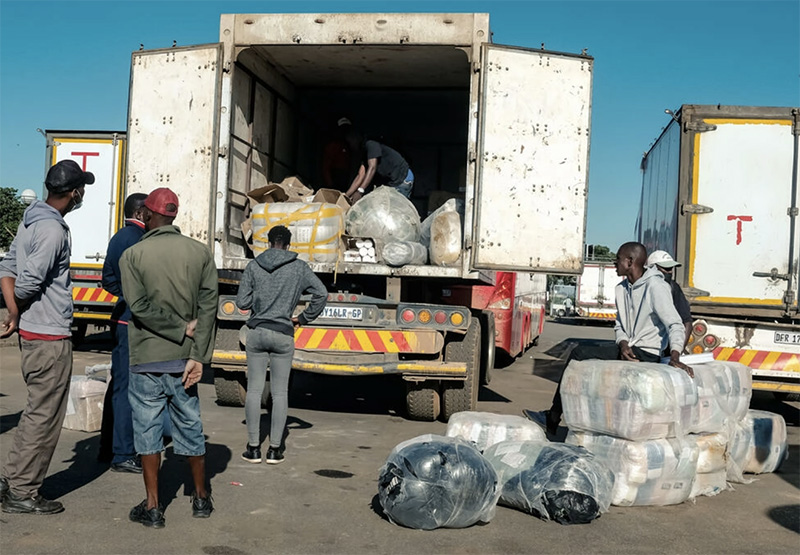 THE arrival of the truck is greeted with relief in this deprived area of Harare. Children rush to unload flour, oil, laundry: everything comes from South Africa, by delivery men who enjoy a juicy informal business still fed by the recent rise in prices.

In Zimbabwe, the essential is missing and everything is expensive: food, fuel, electricity. The economy has been plunged into a deep crisis for more than twenty years, international donors have withdrawn due to unsustainable debt. Inflation is galloping and with the Russian invasion of Ukraine, commodity prices have risen further.

Gasoline increased twice in the space of a week. Grain prices soared, with Russia being Zimbabwe’s main supplier of wheat. As a result, inflation at 66% in February.

“We have to prepare for a wave of price increases,” Retailers’ Confederation (CZR) president Denford Mutashu told AFP, predicting that Zimbabweans will shop even more at the big South African neighbour to escape it.

In shops, the two-liter bottle of oil costs $4.50, a dollar less if delivered from South Africa.

The “malayitsha”, carriers in the Ndebele language, cross the border most often at night between the two southern African countries. Beitbridge is one of the busiest border crossings on the continent, and also one of the most porous, smuggling is commonplace.

But these informal delivery men, often in contact with border guards, do not traffic in alcohol or cigarettes. They switch from the “mealie meal”, the maize flour that is the basic dish, and bring the groceries to the doorstep of customers in Zimbabwe.

The system works via word-of-mouth and mobile messaging. Goods travel up to 600 km. The road is bad but each crossing can bring a lot.

“Customers get in touch via WhatsApp, choose the products, pay on a South African account and then I deliver. It’s simple,” he told AFP. And it also allows it to avoid the uncertainties of fluctuations in the local currency.

“At each delivery, we are greeted by smiles: it shows the level of gratitude, because these people, if they did not receive this food, would be hungry,” says this former truck driver. He himself lost his job during the pandemic.

Clever Murape, 35, lives from the sale of scrap metal and especially from the help sent by his sister, employed as a maid in South Africa. “My older sister sends food via ‘malayitsha’ every month,” he says. And between deliveries, the family of ten “rations”.

With an estimated three million Zimbabweans living in South Africa and a large diaspora scattered around the world, relatives living abroad have long been a lifeline for those who remain at home.

In the capital Harare, queues are getting longer every day in front of international transfer offices. According to the World Bank, 1.6 billion euros are sent to the country each year, or more than 10% of GDP.

But since Covid, which has further exacerbated poverty, the demand to send food or any other basic necessities directly has grown and in a hitherto informal market, online supermarkets have even launched applications to organize cross-border deliveries.