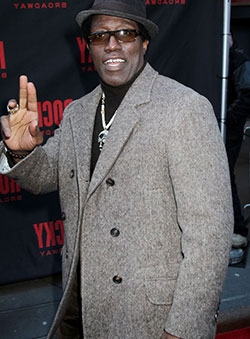 U.S. action star Wesley Snipes is back on the big screen for the first time since his release from prison as he joins Sylvester Stallone and the cast of “The Expendables 3.”
Speaking ahead of the movie’s world premiere Monday, Snipes joked that Stallone had him in mind for the first “Expendables” movie but he was “just a little occupied at the time.”
“They reserved a spot for me and when the opportunity came along he reached out again and said come join us, we would like you to be a part of this.”
Snipes was sentenced to three years in prison in 2008 after failing to file income tax returns. He began his jail term in December 2010.
The movie makes reference to Snipes’ time behind bars with a tax-evasion joke in the opening scenes.
“Whether I do something really funny or really stupid, it is okay with me,” says Snipes. “I think that is what life is about. You can’t take life itself too seriously.”
“At the end of the day, nobody really cares. You’re going to be forgotten anyway. The issues and problems that you think are like mountains that you have to deal with now, after time goes by, nobody cares,” he continues. “Might as well have a good time with it.”
The 52-year-old actor is currently looking for new action projects, with a return to the blood-soaked universe of vampire “Blade” at the top of his list.
“A lot of people are calling for it and I would like to do it,” he says.Advertisement