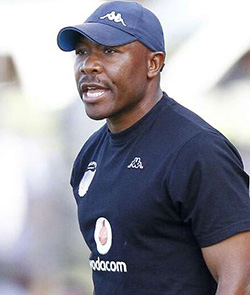 WILFRED Mugeyi has confirmed his departure from AmaZulu following the appointment of Steve Barker as the new coach 20 days ago.
Mugeyi initially served as assistant coach to Craig Rosslee before taking over for six games on a caretaker basis when Rosslee was fired as Usuthu’s struggles continued.
However, with Barker’s appointment Mugeyi was moved aside and has now left the club.
“I have left the club after negotiating a settlement for my contract,” the former Bush Bucks striker tells KickOff.com.
“Following the appointment of the new coach the club couldn’t accommodate me anywhere else within the club structures as that would have meant getting rid of another coach.
“I am now back in Cape Town awaiting my next coaching challenge, but I am grateful to having had that experience of being briefly at the helm at AmaZulu.”
Barker has been working with Ronnie Moroka as his assistant since his arrival at the end of last month.
FIXTURES
Saturday: Pretoria University v Mamelodi Sundowns, Black Aces v Free State Stars, Kaizer Chiefs v Chippa United, Orlando Pirates v Ajax Cape Town, Supersport Utd v Polokwane City
Sunday: Platinum Stars v Bidvest Wits, Bloem Celtic v Moroka Swallows