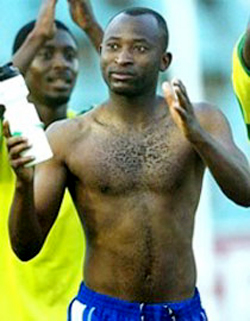 ZIMBABWEAN soccer legend, Peter Ndlovu, was Tuesday stuck in Zimbabwe after his car was allegedly broken into and his travelling documents stolen.
Ndlovu is now team manager for Absa premiere soccer league side, Mamelodi Sundowns Football Club, in South Africa, a club he played for at the twilight of his football career.
In an appeal posted on his Facebook page, Ndlovu who appears to know the identity of the culprit, appealed to him to “return or surrender the passports at a nearest police station so that we can travel with my family please.”
The incident allegedly took place at TM Hyper, now Pick n Pay Hyper,  on December 31.
“Even if you surrender them by Entumbane lapho ohlala khona khushapu Bro (where you reside my brother). U know ukuthi siyazana (you are aware that we know each other) but I don’t have to fight you over 3 year kids passports. What would you do with kids passports. Money you took and it’s fine (sic),” read part of the appeal.
Ndlovu continued, “Little did I know when you greeted me and asked for a Christmas Box, you had those intentions. However, I understand your situation. As long as I don’t get my kids passports my friend I will put a reward for anyone who calls police for you. I will also submit to the police a blown up picture of you Entumbane lako Hyper lapho otshontsha khona (and Hyper were you operate from).”
Misfortune seems to follow Ndlovu, as in 2012, he was involved in a fatal accident on his way to Victoria Falls that claimed the life of his brother, Adam Ndlovu, who was also the country’s football legend and a female passenger they were travelling with.
In 2013 his Nissan Navara vehicle was involved in an accident along Leopold Takawira Avenue in Bulawayo, when Madinda Ndlovu’s daughter whose was driving the car on the fateful day hit three vendors who were sitting on the pavement.
Contacted for a comment, a person who answered Ndlovu’s mobile phone said he was busy and could not take the call. Advertisement