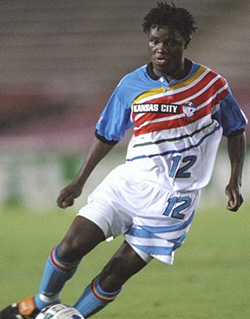 THE soccer star of the year award is the ultimate individual prize for players in the Zimbabwe football fraternity. Since its inception in 1969, the award has been won by many great players including a record five times by the great man himself, George ‘Mastermind’ Shaya. It is however, fair to point out that there were some equally good players who missed the award and it is to these perennial bridesmaids that I dedicate this article.
Just to situate this argument in its proper context, here are the winners of the award over the years. George Shaya, 1969, 1972, 1975, 1976, 1977, Tendai Chieza 1970, Peter ‘Thunderboots’ Nyama 1971, Ernest Kamba 1973, Moses ‘Madala’ Moyo 1974, George ‘TNT’ Rollo 1978 and Shacky ‘Mr Goals’ Tauro 1979 completing the list of pre-independence winners.
The post-independence era produced David ‘Yogi’ Mandigora, 1980, Stanley ‘Sinyo’ Ndunduma, Japhet ‘Short Cat’ Mparutsa, Ephert Lungu, James Takavada, Stanley Ndunduma, Moses ‘Razorman’ Chunga, Mercedes ‘Rambo’ Sibanda, Ephraim Chawanda, Masimba Dinyero, Peter Ndlovu, Peter Ndovu and George Nechironga as joint winners, Wifred Mugeyi, Agent Sawu, Memory Mucherahova, Tauya ‘Doctor’ Mrewa, Stuart Murisa, Walter Chuma, Zenzo Moyo, Maxwell Dube, Daisy Kapenya, Energy Murambadoro, Cephas Chimedza, Joseph Kamwendo, Clemence Mutawu, Murape Murape, Evans Chikwaikwai, Zhuwawo, Charles Sibanda, Washington Arubi, Devon Mukamba, Dennis Dauda and Danny Phiri in that order. The only year when there was no award was in 1998.
As the statistics above clearly indicate, George Shaya dominated the award from 1969 to 1977. With this in mind one has to feel for the other great players who plied their trade during this era, and there was no shortage of them. Players like Chita Antonio, Gibson Homela, Shadreck Ngwenya, Ebson Muguyo, Lawrence Phiri to mention a few, but there is one player who has come to my attention recently.  I think he should have wrestled this award from the great man.
Complete midfielder
William Sibanda of Zimbabwe Saints is that man. My research has revealed that he was the complete midfielder, the typical box to box player, a ball winner and a great passer of the ball. Many have compared him to the former colossal midfield general and Arsenal captain, Patrick Viera or should it be the other way round.Advertisement

Anyway the qualities that the comparison seeks to draw out are easy to discern for the modern fan. Sibanda was any coach’s dream midfield player, one who could dominate the middle of the park. With these highly appreciated qualities, it is easy to argue that the man should have won the award during this era, putting Shaya’s dominance on hold for a year or two.
The post-independence era has produced many quality players. I watched most of the players during this period and I trust my judgement in arguing that there were many players who deserved this award but for some reasons never won it.
I have always wondered how Joel ‘Jubilee’ Shambo who spent over fifteen years illuminating the various stadiums in Zimbabwe with his exquisite skills would fail to clinch the award at least once. It beggars belief that such an accomplished player, regarded by many as one of the best midfielders of his generation would miss out on this prestigious award. Pundits and fans alike might point to the quality of players during this era which made the competition stiff.