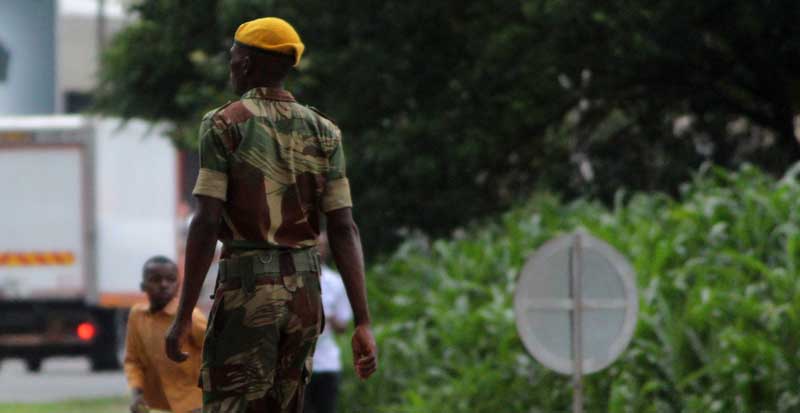 A Zimbabwe National Army soldier allegedly axed three Harare men leaving one of them without fingers in a dispute over a woman.

He is denying the charges arguing that on the day the incident allegedly occurred he was at work.

However in his warned and cautioned statement he revealed that he was at the scene but did not participate in the fight between the complainants and his accomplices who are still at large.

Khumbula said he only intervened trying to stop parties from fighting.

But magistrate Mujaya said Khumbula had no special circumstances in his case to distance himself from his warned and cautioned statement which contradicts his defence.

He said Khumbula’s defence would only make sense if he told court on his initial remand that he was coerced to give the statement.

This prompted the court to conduct a trial within a trial after prosecutor Rudo Chasi insisted that Khumbula was trying to cook evidence to support his defence.

Khumbula had told court that he intends to bring his bosses to testify in his favour as well as registers.

Prosecuting, Chasi told court that Khumbula committed the offence on December 5 last year around 11am when he went to Kuwadzana 1 where one of the complainants, Obert Tagarira was moulding bricks.

It is alleged that he demanded to know who Tafadzwa was before Tagarira told Khumbula and his accomplices that there was no any Tafadzwa at their workplace.

Court heard they were armed with electric shockers, machetes and metal bars which they then used to assault Tagarira and ordered him to show them Tafadzwa who was involved in an illicit affair with their woman.

It is alleged they manhandled Tagarira and drove to riddle Ridge area where they met the other complainants Tinashe Nyabadza and Godfrey Chingobva.

They demanded to be shown Tafadzwa again and they started assaulting the complainants with machetes all over their bodies.

All the complainants sustained serious cuts all over their bodies and on their heads.

Nyabadza’s left hand fingers were chopped off in the process.

The case was reported leading to Khumbula’s arrest.