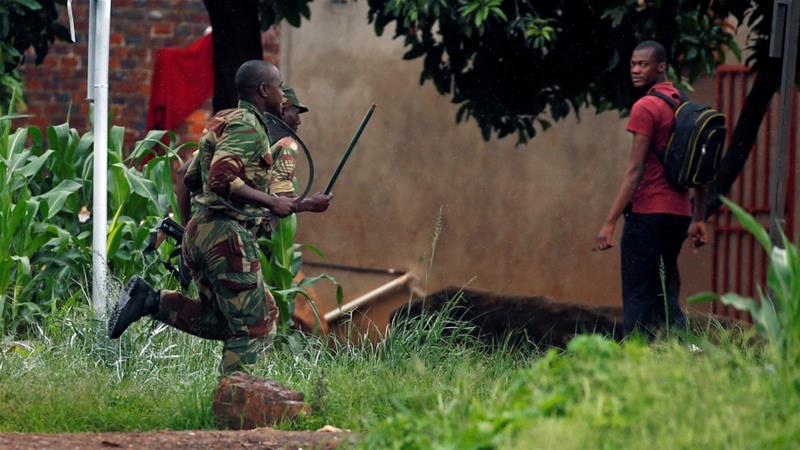 Dete: Police in Dete, Matabeleland North say they were investigating a case in which three soldiers allegedly took turns to whip 14 mine workers after forcing them to lie down on their stomachs.

The three soldiers who are yet to be identified accused the 14 of possessing machetes.

The 14 are employed by Fellow Nine Mine and were on their way to their homes in a company vehicle when they decided to stop at Cross Dete to relieve themselves.

It is at that moment that they were accosted by three soldiers who accused them of possessing machetes.

The incident allegedly happened this past Sunday.

Of the 14, only three decided to report a case of assault against the three soldiers who are yet to be identified.

The soldiers were said to be on patrol when they whipped the 14 around 7.15pm before taking turns to beat them again later on the same night at Dete police base.

According to a report made to the police, the three complainants Godknows Munkombwe (26), Marco Ncube (22) and Methias Mudimba (38) all from Dete were treated and discharged at Hwange Colliery Hospital although they did not sustain visible injuries.

“On 13 September around 7.15pm, the three complainants who are employed by Fellow Nine Mine in Gweru were travelling in a company bus to be delivered to their respective homes. At Cross Dete the bus stopped and the 14 disembarked to relieve themselves. They were then approached by three members of the ZNA who were in uniform and accused them of possessing machetes,” read part of statement by police.

It is alleged that the three soldiers ordered the 14 to lie down and whipped them several times.

They then ordered them to get into the bus and drove to a nearby ZRP Dete police base where the soldiers once again took turns to assault the complainants.

After the assault, the 14 were ordered to get back into their bus and drive off.

Only Munkombwe, Ncube and Mudimba reported the abuse to the police.