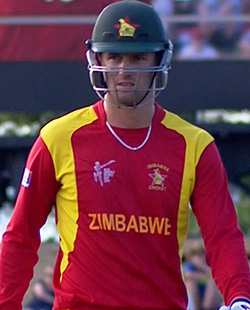 AN broken century stand between Brian Chari and Craig Ervine gave Zimbabwe a solid start after Asela Gunaratne’s maiden Test hundred had carried Sri Lanka to 504 on the second day of the second Test at Harare Sports Club on Monday.
Playing just his second Test, Gunaratne scored 116 to marshal the tail to good effect and frustrate the Zimbabwean bowlers, before his dismissal brought the end of the Sri Lankan innings on the stroke of tea.
When Rangana Herath opened the bowling and grabbed the wickets of Tino Mawoyo and Hamilton Masakadza to reduce Zimbabwe to 17 for two, the hosts looked to be embarking on one of their trademark batting collapses.
But Chari and Ervine added 109 for the third wicket without being parted, taking Zimbabwe to stumps on 126 for two with both batsmen closing the day on 60 not out.
“We would have liked to have a few more wickets down but hopefully we can grab a few early on tomorrow,” said Sri Lanka coach Graham Ford.
“We’ve seen Rangana turn some deliveries this evening, so once he gets a few going he becomes more of a factor.”
The tourists began the day on 290 for five, with Gunaratne on 13, and despite losing centurion Dhananjaya de Silva they were able to make rapid progress during the morning session.
And then No. 11 Lahiru Kumara held on long enough for Gunaratne to reach three figures and carry the score past 500.
“It was an individual plan to be more positive in the way that we got ourselves in,” said Ervine.
“We need to turn up for that first hour tomorrow, and then the first session, and try and get through without losing a wicket.”Advertisement