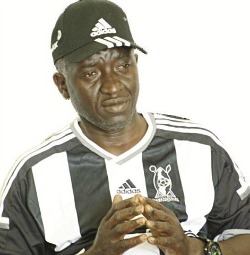 Highlanders 2-1 Dynamos
Caps United 0-3 Chicken Inn
HIGHLANDERS coach Amin Soma Phiri praised God as his charges overcame 10-men Dynamos in a fully packed Barbourfields Stadium on Sunday to reach the final of the $433, 000 Net One EasyCall Cup.
Winners are set to pocket $80, 000, runners up $50, 000 while losing finalists get $30, 000. Losing quarter-finalists will get $20, 000 each.
Highlanders will now meet bogey side Chicken Inn in the final next weekend at Barbourfields after the 2015 Castle Lager Premier Soccer League champions easily dispatched Caps United 3-0 in the first semi-final, rather violence filled from the Harare side’s fans, on Saturday.
Speaking after the match, first in his vernacular Ndebele, Soma-Phiri admitted his side has been the laughing stock by perennially losing to Dynamos, but God had finally smiled on them.
“There is a saying that goes Basheshe ba’shleka kodwa Inkosi isizwile.
It simply means they scorned us not knowing God was hearing our prayers.
“We have not beaten Dynamos in a very long time in a competitive match and to win a match of this magnitude is very important for us.
“The plan for us was to get the early goals and then defend in the second half and we did just that. I told my defence to take care of Takesure Chinyama and Mutuma (Rodreck) and they did just that. I am so excited for the boys and this has given me something on my CV,” an elated Soma-Phiri said.
And, in just 32 minutes they were 2-0 up when veteran striker Obadiah Tarumbwa scored after just six minutes from the start of the match.
Leading gunman and 2015 Golden Boot winner Knox Mutizwa showed why he is highly rated when he exquisitely chipped in the second in the 32 minute to give Highlanders the lead going into the break.
Mutizwa arrived on Saturday afternoon from a four-day trial stint at South African side Bidvest Wits and coach Gavin Hunt would be extremely pleased that his target in the January transfer window found the net, just 24 hours after arriving in Bulawayo.
In the second half, Rodreck Mutuma gave Dynamos a glimmer of hope when he slotted home at the far post after some poor defending by the Highlanders defence in the 57nd minute.
But again, Mutuma laid bare his bad boy antics when he was red-carded moments later and coach Tonderayi Ndiraya was not impressed and promised action.Advertisement

“I am really disappointed. We were looking for the equaliser and for him to do that kind of thing, for a player of his stature and calibre was quite disappointing. Yes he scored, but that is very disappointing to then behave like that. We will see what we can do about that after having spent the whole week fighting for them to be part of the game.
“We defended poorly in the opening minutes and we paid dearly for that. We came back strongly in the second half, got the goal and the Highlanders defence was panicking but we did not take the chances that came our way,” said Ndiraya who has lost twice to Highlanders home and away in cup matches.
Mutuma and Chinyama were each fined $1000 and banned for four matches for abusing and insulting referee Philani Ncube after they had lost 2-1 to Harare City in the final of the Chibuku Super Cup on October 31.
Dynamos had also threatened to boycott Sunday’s match due to that until a meeting with PSL chairman Twine Phiri resolved issues and the club appealed the bans, making the pair eligible for the match.
At least for Ndiraya, his fears that there would be violence seemed a pie in the sky as the match was played in peace throughout and even after the game fans behaved very well. In fact, Dynamos’ Bulawayo fans have always been best behaved.
Dynamos beat Highlanders 3-2 in the first league match of the season in Harare before the two teams drew 1-1 in the reverse fixture at Barbourfields.
They also met twice in low key cup competitions, with Dynamos claiming the Bob 91 Super Cup while Highlanders won the ZNA Commander’s Charity
Shield.
The last ‘serious’ cup match between the two at BF was the CBZ Cup final which Dynamos won 2-1.