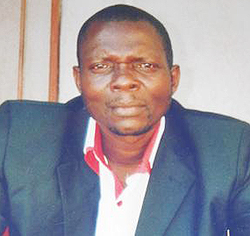 THE singer Josphat Somanje and five members of his Pengaudzoke band were on Monday morning involved in a serious road accident.
The band was coming from a show in Mbare and returning to their base in Marondera when they had a head-on collision near Dema growth point in Seke.
Acting National Traffic Police spokesperson Assistant Inspector Luckmore Chakanza said the musicians’ Toyota Venture vehicle collided head-on with a T35 truck heading towards Harare.
Never Somanje, nephew to Josphat, said drummer Afick Jones broke both legs, while Somanje sustained chest injuries.

The other band members – Patrick Jivason, Patrick Masuku, Alvin Sindi and Christopher Jackson – escaped with minor injuries.
Maxwell Goneke, who lives in Dema near the scene of the accident, said: “By the time we arrived, the injured were being ferried to Chitungwiza Hospital.
“The Pengaudzoke crew had a head on collision with a truck which was heading for Harare tobacco action floors .The tobacco truck had four people.”
JOSPHAT SOMANJE: THIS TIME HAULUME