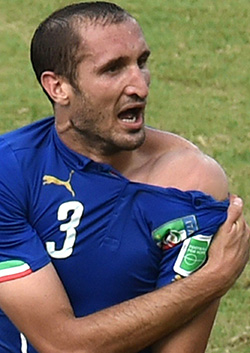 Luis Suarez shows his teeth – again.
THE World Cup headlines were hogged by a little Uruguayan who once again failed to keep his temper and his teeth to himself.
This time around his hapless chew-toy was Italy’s Giorgio Chiellini; and his excuse was initially that he lost his balance and merely inserted his incisors into his opponent’s shoulder as he attempted to regain his footing.
A four-month ban from football later, and he did at least manage to summon up an apology.
FIFA failures continue to plague football
Let’s not forget, though, that FIFA are hardly the guardians of morality they like to present themselves as, no matter how hard they come down on sociopaths with biting compulsions.
2014 was riddled with more accusations, and the year drew to a close with lawyer Michael Garcia resigning after his report into FIFA’s World Cup bidding processes was misrepresented.
FIFA’s hand seemed to finally be forced – but they’ve said they’re only going to release a redacted version of the investigation. Just how redacted that’ll be remains to be seen.
Serbia v Albania abandoned

This one kicked off. Big time. The politically-sensitive Euro 2016 qualifier was abandoned after just 30 minutes following a mass brawl between players from both sides. The spark cause? A drone which flew over the stadium and lowered a ‘Greater Albania’ flag onto the pitch. A Serbian player got hold of the flag and started tearing it down, provoking Albanian players. Cue a major fracas.
Hamilton and Rosberg the best of enemies at Mercedes
Lewis Hamilton took the drivers’ championship but Nico Rosberg kept the race alive to the very end of the season – and kept it compelling as the team-mates’ obvious dislike for each other oozed across the track. There were crashes (like the one forcing Hamilton off the track at Spa), there were debates over team orders (like when Rosberg demanding to be allowed to pass his colleague), there were ‘clear-the-air’ meetings – and it’s all going to happen again next year.
Russia accused of ‘shocking’ doping scandalAdvertisement

Russia were accused of running an “East German-style” doping programme for athletes, with German TV network MDR claiming that up to “99 per cent” of the Russian Olympic team used doping – adding that positive tests had been covered up. Another German documentary insisted the problem spread wider across the world of athletics, saying a leading British athlete (unnamed for legal reasons) was part of a 150-strong list of competitors who escaped investigation despite abnormal blood values between 2006 and 2008.
Federer is falling apart – and, through no fault of his own, ruins ATP Finals

Thousands of fans sitting expectantly in the O2 Arena? Check. Thousands of pounds in ticket money tucked away at the tills? Check. Millions of television viewers sitting at home waiting for the final showdown of the men’s tennis season? Check. All you need now are two tennis geniuses at the top of their game ready to do battle.
Except only Novak Djokovic showed up, with Roger Federer pleading injury and exhaustion, saying: “I’m sorry I’m not fit to play. I hope you understand. I wanted to come out personally and explain. I did everything I could. I took pain-killers, had rest until the very end, but I just cannot compete at this level with Novak.”
The disappointed crowd got to see a few exhibition matches, featuring Pat Cash, John McEnroe and Andy Murray (showing his usual dry humour when he wondered if he’d worn Federer down when the Swiss crushed him 6-0 6-1 a few days before). But it wasn’t quite what the crowd had expected – there were a lot of disappointed tennis fans across the globe.