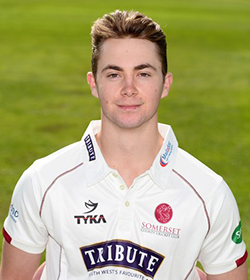 EDDIE Byrom, a 20-year-old opening batsman who recently broke into the Somerset first team, has signed a winter deal with Zimbabwe’s new domestic side, Rising Stars. Byrom, who was born in Harare and attended St John’s College, one of the top schools in the area, is on a two-year deal with Somerset but is yet to decide his national allegiance.
“I spoke with Somerset about some options during the English winter to further develop my game. Overall I’m just really looking forward to experiencing first-class cricket in Zimbabwe and the different challenges it will pose compared to England,” Byrom said.
With big names Brendan Taylor and Kyle Jarvis back in Zimbabwe, attention has turned to some of the country’s other expats scattered across the county scene, and it was Tatenda Taibu who contacted Byrom about the possibility of playing in his homeland.
Not only is Taibu Zimbabwe’s convener of selectors but he also plays a role in development, having spent a significant part of the English winter touring with an academy side of young Zimbabwean players. The players from the academy became Zimbabwe’s fifth domestic team, Rising Stars, and it is this side that Byrom will represent, in the hope that he will bolster their batting.
“Eddie has been in England, opening the batting with Marcus Trescothick in a strong Somerset side. It’s this experience that could be very useful for our squad and will definitely help to bring some stability,” Stuart Matsikenyeri, the Rising Stars coach, said.
Rising Stars have lost both their Logan Cup matches so far but have earned the praise of former national captain Taylor, who played against them for Mid-West Rhinos in the season-opening round two weeks ago.
Taylor scored a century but said he had to “work my butt off” for those runs and believed that the Rising Stars bowling “warranted them receiving first-class status”. He also said he thought their batting needed propping up, so it stands to reason that Byrom has been included.Advertisement

He has already arrived in Zimbabwe and is expected to play in the Rising Stars’ next match, against the Matabeleland Tuskers, starting on Sunday.
“I’ve already had my first training session with the squad and I’ve been impressed with their hard work and commitment. Obviously we have lost the first couple of games so hopefully we can bounce back from that and I can play a part. I can’t wait to get started,” Byrom said.
Byrom’s return will undoubtedly raise interest in whether he will avail himself for the national side but the administration is not looking to push him into choosing just yet.
“Right now we simply don’t know [if he will play for Zimbabwe],” Matsikenyeri said.
“He has his contract with Somerset and we respect that. If he can contribute with the bat and help the Rising Stars to start climbing the ladder, then we’ll be happy with that.”