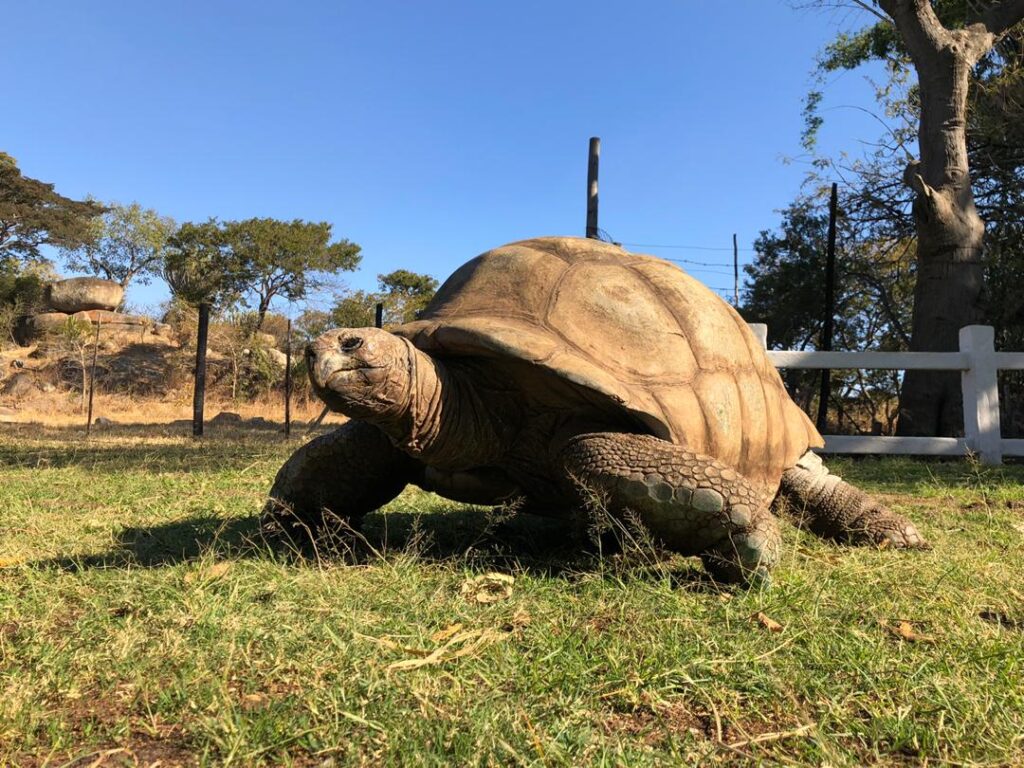 Tommy moves with the measured half-gait of a senior citizen—as he should, considering his advanced age and earth-collapsing weight. When a tortoise is in his third or fourth century and tips the scales at more than 1,100 pounds (500 kg), no one tells him to hurry.

Tommy doesn’t have far to go, anyway. Just to his thatched hut on the grounds of Lion Park, a sanctuary for “big cats” a half-hour drive west of Zimbabwe’s capital city. Then out into the sun, where mothers bring their children to gawk at his size and his lumbering vigor.

Southern Africa is a nice place for an herbivore to rest in his declining years. Tourists feed him shredded lettuce and cabbage, and he can count on fruit and grass coming before long.

They take good care of him here. He has his own swimming pool, where he sloshes and splashes as swifter game species like eland and duiker antelope dart along the park’s 33 acres.

It’s been at least 50 years since Tommy arrived here from neighboring Mozambique. It’s an even longer way back to the Galápagos Islands.

“He is between two and three hundred years old, but no one really knows,” says 52-year-old Graeme Bristow, who inherited Lion Park following the death of his father Viv last year. “Based on his size now and analyzing his shell pattern, we suspect he is way over 200 years old.”

That would make Tommy the oldest living land animal anywhere on Earth. The Guinness Book of World Records awards that distinction to an 188-year-old tortoise in the Seychelles Islands named Jonathan, based on records that show when he arrived there and how big he was at the time.

No such records exist for Zimbabwe’s contender to the title, and after about 150 years the “age lines” that often appear on a Tortoise’s shell fade away.

But a 250-year-old Tommy would have been born before both the U.S. and French revolutions. He would also predate the inventions of parachutes, batteries and flush toilets.

“Tommy has seen the changing of eras—from Rhodesia, war, Zimbabwe, presidents,” says Bristow. “He has met top ministers, presidents, dignitaries and also the common man and welcomed them all as equals.”

Bristow says Tommy first came to Africa in around 1945, kept aboard a trading ship along with dozens of others, as a potential source of fresh meat for sailors. The tough-shelled animals can live for up to a year without food or water, making them an ideal alternative when the fishing was poor.

Charles Darwin, who formulated much of his theories governing evolution and natural selection while studying unique wildlife in the Galápagos, carried at least 40 of the animals on his ship, the HMS Beagle, for the same reason.

Tens of thousands of Tommy’s kind were plucked off the Galápagos terrain, easy pickings for whalers who used the archipelago as a waystation. Only one remote area of highlands on the island of Santa Cruz gave tortoises a natural defense. Hundreds still roam wild there, defying extinction.

The crew that snatched Tommy left him in Mozambique, Bristow said. “The sailors used to barter with the local market people,” he says, “and he was exchanged for fresh veggies and fruits for their next voyage.”

A woman whose name Bristow recalled only as “Mrs. Trinidad” bought the tortoise five years later. She kept him until 1971, when she left Africa and gifted him to friends of Bristow’s grandfather Osric in the Mozambique port city of Beira. “Ossie” moved Tommy to Zimbabwe a year later and gifted him to Lion Park, then run by his son Viv—Graeme’s father.

Bristow, or the park’s general manager Anthony Newall, feed Tommy regularly. He gets “a carefully managed diet of fruits and vegetables, along with grass and hay,” Bristow says.

Many older Zimbabweans who visited Lion Park for decades as children remember sitting on Tommy and riding him.

“We don’t allow that anymore,” says Bristow, but tourists seem just as satisfied with selfies.

This article was first published on www.zenger.news