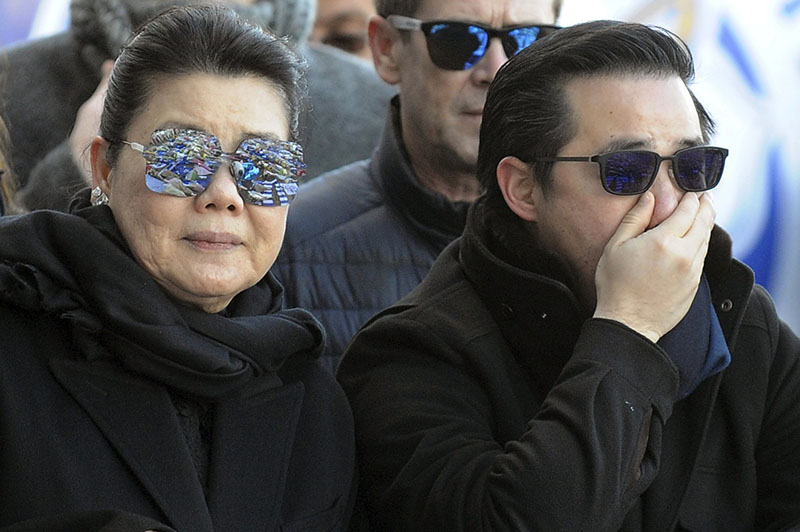 Aiyawatt Srivaddhanaprabha (right) with his mother
Spread This News

LEICESTER: The son of the Leicester owner killed in a helicopter crash promised Wednesday to honor his father by continuing his “big vision and dreams” at the Premier League club.

“From him, I have received a very big mission and legacy to pass on and I intend to do just that,” Aiyawatt Srivaddhanaprabha said in a tribute to his father, Vichai, who died with four other people when his helicopter spiralled out of control as it left the stadium following a Premier League game on Saturday.

Vichai, a Thai billionaire owner of retail company King Power, led the consortium that bought Leicester in August 2010 and has forged a close bond not only with the soccer team but with the local community. Aiyawatt is the vice chairman.

In a message that appeared to underline their commitment to Leicester, Aiyawatt said his father had turned the club into a family.

“And nothing,” he added, “would make him prouder than to see how the Leicester City family that he built is supporting each other through a time of such sadness.”

Leicester’s grieving players will take to the field for the first time since the crash when they visit Cardiff for a Premier League game on Saturday.

The Foxes will travel to Wales by road on Friday after making the decision that flying would be insensitive given the circumstances of Vichai’s death, Britain’s Press Association reported.

Fans’ groups were meeting Wednesday to discuss a tribute to the club’s late owner at Leicester’s next home game, against Burnley on Nov. 10.

They are planning to march from Leicester’s city centre to the team’s King Power Stadium before the game, with 5,000 supporters taking part — in reference to the preseason title odds of 5,000-1 given to Leicester the year it won the Premier League in 2015-16.