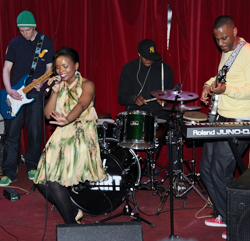 EVER wondered what a collaboration between funk rock band the Red Hot Chili Peppers, and the soulful singer and rapper, Lauryn Hill, sounds like?
The answer is none other than Soneni & The Soul, an underground soul band that is billed to feature at this year’s edition of the Zimbabwe Achievers Awards (ZAA) in London.
Soneni & The Soul will join an exciting line up of entertainers to toast the success of this year’s group of award recipients, who range from academics and entrepreneurs to community champions and musicians.
Fresh from releasing their debut EP, titled Million Miles Away, in December last year, the band have been busy rocking live shows at music venues around London and have created a buzz with their energetic, passionate and soulful performances.
Taking their inspiration from lead singer and songwriter Soneni’s Zimbabwean roots, their music fuses bass and percussion grooves with catchy guitar riffs and soft soulful vocals.
Apart from Soneni, the band consists of producer and bassist Elmo, drummer Boukie, and guitarist Andrew aka A-Train.

They have steadily built a loyal and supportive fan base on the back of support from the likes of BBC 1Xtra, BBC London 94.9, regular airplay on underground heavyweights Déjà Vu FM and Rinse FM, as well as a residency at live music night We Play Music Live in London.

Soneni & The Soul have also performed at established venues such as The Bedford as well as The Jazz Café in Camden Town.
Nothing beats endorsement by an established recording artiste for any new act trying to break into the big time. The celebrated US hip-hop band The Roots featured Soneni & The Soul on its blog as an exciting new band on the rise.
More thumbs-up were to come from rap icon Raekwon ‘The Chef’ of the legendary hip-hop super-group Wu Tang Clan. In a YouTube message, he tells the world to look out for soulful songstress Soneni’s ‘live music sound with some jazzy mean stuff’.
The band’s EP opens with the upbeat track, We Can Go (In the Sunshine), which has a funky groove and positive lyrics, followed by the title song Million Miles Away, which takes us on Soneni’s daily struggle between dreams and reality.
The upbeat Siyahamba, with its pulsating house music sound, is guaranteed to pack dance floors.  The eight-track EP is available to download in a variety of digital formats.
The ZAA, now firmly established as the premier annual red carpet show to honour outstanding Zimbabwean achievers in the UK, will be held on April 20 at the Millennium Gloucester Hotel in London.Advertisement