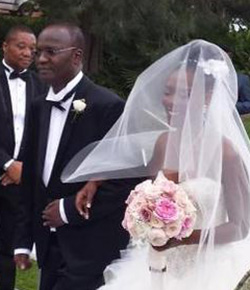 INFORMATION Minister Professor Jonathan Moyo showcased his artistic side as a talented songwriter, guitarist and performer as he entertained guests with a special song dedicated to his daughter, Lungile Moyo, who married Tafadzwa Wakatama at a glittering ceremony at the Rain Tree Gardens in Umwinsdale on Saturday.
Moyo, who has produced a number of songs over the years, most notably for the Pax Afro group that made its mark in the early 2000s, enchanted guests at the picturesque venue with a special wedding song that he composed and performed as a special surprise.
Not only that the bridal party entered the reception to the sound of “This Is Your Day”, a song whose words and music were composed by Prof Moyo which he recorded with the Sunshine Band.
His special dedication to Lungile, titled “It’s Been a Privilege Raising You”, left guests spellbound with his vocal ability and aptitude with the acoustic guitar.
Moyo told the gathering that it was the first time that he had sung for a live audience.
He praised the couple for their union, saying marriage promotes familyhood, which is the most important facet of society.
“It may indeed be a celebration of wedding or of a marriage, but when all is said and done it is the celebration of the making of a family. Most of the time, we are reminded that the most important experiences of our lives start with the family. But we don’t get time to celebrate family.
“Maybe we should have a day that we call a family day, to celebrate our nationhood through our familyhood,’’ he said.
Moyo said he was overwhelmed by the occasion. “This is a challenge for me, I have never been in this situation before, a situation that ties one’s tongue, leaving them speechless, not sure what to say,” he said.
“The other problem I have, of course, is that even though I have joined the ranks of fathers-in-law, I remain a son-in-law myself and my in-laws are here and they read a lot of things, hear a lot of things, but I have never been in a situation like this with them.
“So, the best I can do is to welcome them and thank them for being part of this very important occasion in our family.
“The last, second last thing, I would like to do is to thank Tafadzwa for coming together with my daughter in marriage and to thank him in advance for accepting that from now on he is responsible for all the bills. This a moment I have been waiting for,” he said drawing laughter from the guests.Advertisement

Speaking at the same occasion, Zanu PF national chairman, Ambassador Simon Khaya wished the couple a prosperous union.
“Lungile means goodness and Tafadzwa means happiness. I believe that given these two sides of the same coin, we are seeing a very prosperous side of the future through your union.
“It rained today, which is what happens when a princess weds. This means that the ancestors have said ‘well-done done you should proceed’,” he said.
The bride arrived at the wedding venue in a black and grey Rolls Royce that was part of a convoy of top of the range vehicles.
Bishop Trevor Manhanga of the Evangelical Fellowship of Zimbabwe presided over the wedding ceremony.
Some of the prominent guests at the wedding included Senate President Edna Madzongwe, Ministers Ignatius Chombo, Josiah Hungwe and Saviour Kasukuwere, Commander of the Zimbabwe Defence Forces General Constantine Chiwenga, deputy ministers and members of Parliament, Prosecutor-General Johannes Tomana, senior officials from Government and the ruling party, businessmen and other prominent people.