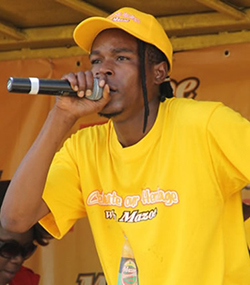 ZIM-DANCEHALL artist, Soul Jah Love, who was last Friday verbally attacked by Zanu PF Youth leader, Innocent Hamandishe, has released a new song hitting back at the ruling party, saying it was him who had lured the multitude of people, mostly youths who thronged Sakubva Stadium on the day.
Hamandishe last Friday threw a salvo at the award-winning artist, accusing him of disrespecting President Robert Mugabe and his wife, Grace and threatened to ban him from future Zanu PF events.
“Who is Soul Jah Love? We don’t care who you are, please behave yourself. Stop what you are doing. That is indiscipline, you are disrupting the programme.
“We have stopped Soul Jah Love from performing because of indiscipline. This show you have no respect for the President,” Hamandishe said.
“Hausi chinhu gara pasi (You are nothing, sit down)” he continued.
In retaliation, the controversial musician penned a song saying there was nothing that he could have done because his fans were enjoying his music and there was no way he could have stopped them from cheering.
“Handisi chinhu ndiri zvinhu, ndiregererei kana ndarasa hunhu asi inyaya yekudiwa nevanhu. Handingava vanyararidze nokuti ndini ndavaunganidza (Forgive me if I wronged you but I can’t silence the people because they have come to listen to me).
He said he was so popularly that everyone wanted to see him, even just to see his shadow, which is why thousands had thronged the stadium.
The song seemed to suggest that the youths who came to Sakubva stadium on Friday were not there for Mugabe’s Youth Interface Rally but to listen to their favourite musician.
Soul Jah Love, who often plays at Zanu PF events at the request of First Lady Grace Mugabe, said while the Zanu PF youth leader viewed him as some nonentity, he had become so popular that just his appearance sent crowds wild.
He also appeared to attack the Zanu PF-aligned terror group, Chipangano, adding he was not there to disrupt Zanu PF programmes.
The youthful musician said he had come to the stadium to entertain people not to punish them by forcing them to sit and listen to speeches instead of listening to his music, which they had come to hear.
President Mugabe is on a nationwide campaign where he is holding rallies targeted at the youths. However, party officials and supporters were reportedly frog-marching people to the rallies and in some instances, forcing people to contribute financially towards the successful hosting of the rallies.Advertisement

The invitation of the popularly artist, who is currently rocking the nation with his hit song Pamamonya Ipapo, is one way the party has devised to lure the youths.