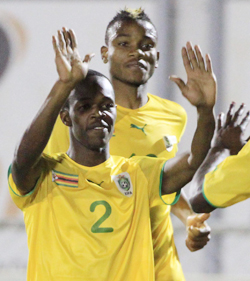 South Africa 1-2 Zimbabwe
KNOWLEDGE Musona and Cuthbert Malajila were both on target for Zimbabwe as they beat South Africa at the Orlando Stadium in Johannesburg on Tuesday night.
Musona volleyed in the opener from Denver Mukamba’s corner kick shortly after half-time.
Zimbabwe then had a brilliant and legitimate team goal ruled out for offside before Malajila turned in Kingstone Nkatha’s low cross on the stroke of full-time.
From the restart, and inside the referee’s optional time, South Africa broke at the other end and Bernard Parker unleashed a cracker with his left foot which went in off the underside of Washington Arubi’s goal.
Zimbabwe coach Ian Gorowa said: “Before the game I was speaking to Knowledge and I said you have failed to score for Kaizer Chiefs and here’s an opportunity for you to score and he did that. I hope he can carry on his form now to Kaizer Chiefs.
“Khama (Billiat) and Kingstone, together with Denver, all combined well especially in the first half. We certainly deserved to win.”
Billiat was voted man of the match and picked up a R10,000 cheque.
He said: “It’s always tough playing away from home, and we had to cope with them. They had chances, but we stuck to our task.”
Musona said: “I think we had a good game. We played very well and managed to defend well for 90 minutes. My confidence is coming back now and I look forward to do more like this whenever I play for my club and the national team.”
SOUTH AFRICA: Keet, Mkhwanazi, Mathoho, Hlatshwayo (Gumede 43rd), Masilela (Van Heerden 76th), Letsholonyane (Gamildien 45th), Kekana, Zungu (Tshabalala 65th), Mathebula (Erasmus 55th), Parker,
Mthembu (Manyama 45th)
ZIMBABWE: Arubi, Nyadombo, Zvirekwi (Chipeta 82), Chindungwe, Bhasera, Katsande, Phiri (Jaure 88th), Billiat (Songani 90th), Musona, Mukamba (Malajila 66th), Nkhatha (Machapa 94th)Advertisement