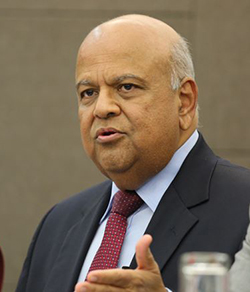 JOHANNESBURG: South Africa held on to its investment-grade credit rating from S&P Global Ratings on Friday, but the rating agency also maintained its negative outlook, citing low GDP growth.
S&P left its rating BBB- but warned in a statement that its negative outlook reflects “the potential adverse consequences of low GDP growth” and signals “that we could lower our ratings on South Africa this year or next if policy measures do not turn the economy around.
South Africa risked losing investment-grade status because of weak growth, large deficits and scandals surrounding President Jacob Zuma.
“Rising political tensions are accentuating vulnerabilities in the country’s sovereign credit profile,” S&P warned, but it said Pretoria had shown resolve to reduce fiscal deficits.
The rand extended earlier gains to trade at 15.0600 at its strongest levels, up more than 3 percent on the day.
South Africa’s Treasury said S&P’s decision gave it more time to implement economic reforms before another review in December and to expand growth, which it has forecast at 0.9 percent in 2016, compared with 1.3 percent last year.
A cut to “junk” status would have pushed up Pretoria’s borrowing costs, making it harder to plug a budget deficit estimated at 3.2 percent of GDP in the 2016/17 financial year.
A review by Fitch, which also rates South Africa one step above non-investment grade, is expected next week, according to the Treasury. Last month Moody’s held its rating at Baa2.
“NEGATIVE NOISES”
S&P’s decision was also seen by analysts as a sign of confidence in Finance Minister Pravin Gordhan, who was re-appointed in December after Zuma removed two other finance ministers within five days.
Following his appointment, the minister set out to reassure ratings agencies and investors that he was committed to stabilising public debt at below 50 percent of national output.
“We are indeed a resilient nation and we have many things going for us,” Gordhan told Talk Radio 702 after S&P’s decision. On eNCA television, he called for an end to “negative noises which harm us in the eyes of global investors.”
South Africa has been gripped by political upheaval ranging from a failed impeachment attempt against Zuma to widespread media reports that the president is at “war” with Gordhan. Zuma has denied the claims.Advertisement

Analysts say Zuma’s ruling party faces a strong challenge at local government elections in August from opponents seeking to capitalize on his troubles.
South Africa “had turned the corner,” said ANC’s spokesman Zizi Kodwa.
BNP Paribas Cadiz Securities economist Jeffrey Schultz said apart from growth, S&P wanted to see less political instability.
“If we don’t see that come December, then I still think that a downgrade into sub-investment-grade territory for our foreign currency rating is very much still on the cards.”