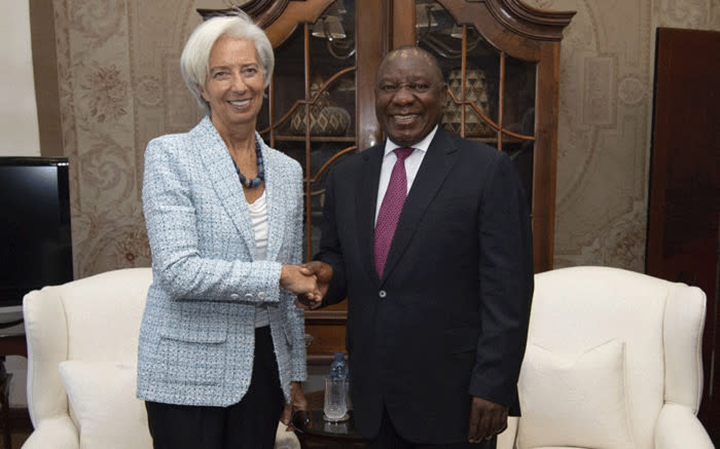 IMF managing director Christine Lagarde says South Africa is not seeking loans from the institution, and nor did the issue come up in any meetings during her whistle-stop tour through South Africa today.

“I am not here to discuss any form of financial support and it did not get raised,” said Lagarde, after meeting President Cyril Ramaphosa and South African Reserve Bank governor Lesetja Kganyago as part of her tour of several African countries this week.

South Africa’s anti-corruption drive got a thumbs-up from the IMF, while Lagarde warned that the Ramaphosa administration’s reforms would take time to implement.

“There is a gap between high expectations and the inevitable slow delivery of change, given the vested interests and rent-seeking communities you need to disrupt a little bit,” said Lagarde.

‘A lot of hard work’

She added: “The timing is not instant, and gratification cannot be like ticking off an application. It takes a lot of hard work.” The IMF delegation had been enthused with the focus on governance and the potential to unleash growth, she said.

Ramaphosa and Lagarde agreed that South Africa’s youth unemployment rate was a growth impediment and that getting young people into the job market through the correct education policies would be the strongest driver of growth.

The Youth Unemployment Service (YES) says there are three million young people in South Africa who are not in work or in training.  The YES is a joint venture between government and the private sector to place interns into workplaces to improve their chances of staying in the economy.

“There is not enough competition (in the economy) and there are prices that could certainly be lowered. The issue of concentration in the industry at large of products and services (is significant),” said Lagarde.  The IMF managing director said she would offer technical support to South Africa to deal with economic concentration.

Lagarde’s briefing was diplomatic. She steered away from making a judgement on whether or not South Africa could evade a ratings downgrade, and on how the country might deal with the pressure that Eskom is placing on the economy.

South Africa is hanging onto its investment grade rating by a whisker, as Moody’s is the only one of the three global rating agencies which have the country on investment grade.

While land reform in general – and land expropriation without compensation in particular – have been the biggest global talking points this year, Lagarde said she appreciated the symbolic value associated with the project, as explained to her by Ramaphosa.

“We have a few ideas on how to make that principle effective and well-accepted.  We appreciate the costs-benefits analysis brought to bear (on land expropriation without compensation),” said Lagarde, who is jetting back out to Washington on Thursday.