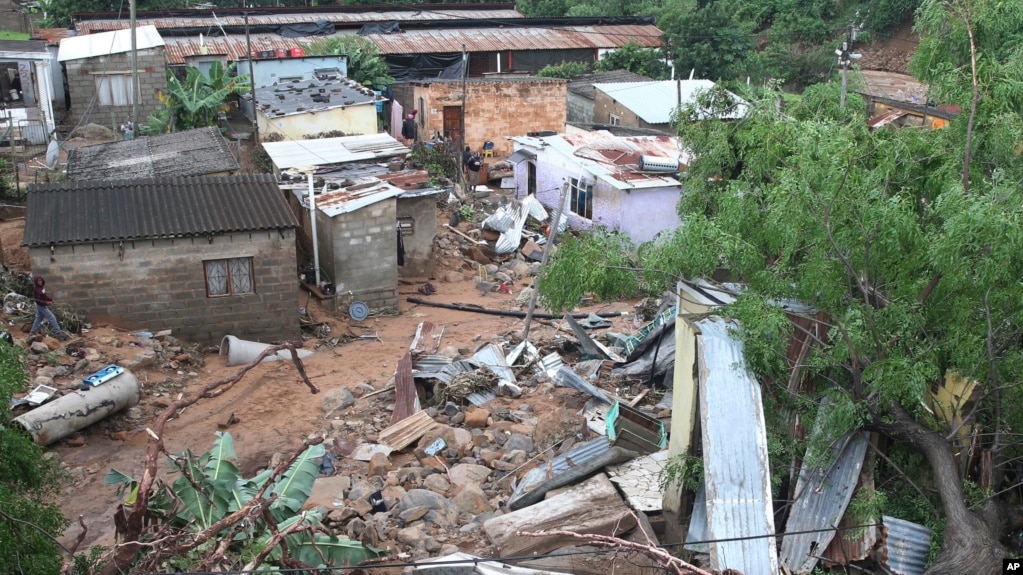 DURBAN, SOUTH AFRICA — The death toll from floods that have battered South Africa’s east coast has risen to 443, including a rescuer, a regional official said on Sunday, as dozens more are still missing.

“The death toll now stands at 443,” Sihle Zikalala, the premier of the KwaZulu-Natal province told a media briefing, adding 63 other people are still unaccounted for.

A member of the rescue and recovery team “experienced difficult breathing and was airlifted to… hospital. Unfortunately he passed away.”

Rains were starting to let up in the flood-ravaged east, allowing for search and relief aid operations to continue after one of the deadliest storms in living memory.

Zikalala said the “inclement weather has slowed our assessment and rescue operation on the ground, but we are once again back in the full swing.”

Floodwaters engulfed parts of the southeastern coastal city of Durban and surrounding areas early last week ripping apart roads, destroying hospitals and sweeping away homes and those trapped inside.

The city of 3,5 million was overcast but the South African Weather Service’s Puseletso Mofokeng said “rainfall is actually clearing.”

“The rainfall is going to clear [away] completely as we move to Wednesday,” he told AFP.

But recovery operations and humanitarian relief continued in the economic hub and tourist magnet city whose beaches and warm Indian Ocean waters would normally have been teeming with Easter holidaymakers.

The number of flood-related emergency calls had decreased compared to early last week.

It rained on Saturday and overnight, “however now, it has stopped,” said McKenzie.

Even so, emergency services were busy attending to a scene in the district of Pinetown where a house collapsed overnight.

“Fortunately now the flood waters have receded and [some] roads cleared. It’s a lot easier to access the community,” he said.

Christians congregated at churches across the city and further afield to offer prayers for those affected by the floods as they celebrated Easter Sunday.

“It’s a tragedy of overwhelming proportions,” said Thabo Makgoba, the Archbishop of Cape Town in his Easter message, a day after his visited Durban.

Government, churches and charities were marshalling relief aid for the more than 40,000 people left homeless by the raging floodwaters.

The government has announced an immediate one billion rand ($68 million) in emergency relief funding.

Deputy Social Development Minister Hendrietta Bogopane-Zulu, said some 340 social workers had been deployed to offer support to traumatized survivors with many still missing children and other relatives.

Most casualties were in Durban, a port city and a major economic hub.

Parts of the city have been without water and electricity since Monday after floods ripped away infrastructure.

Scores of hospitals and hundreds of schools have been destroyed.

The intensity of the floods took South Africa, the most economically advanced African country, by surprise.

While the southeastern region has suffered some flooding before, the devastation has never been so severe. South Africans have previously watched similar tragedies hit neighboring countries such as cyclone-prone Mozambique.

These floods have forced President Cyril Ramaphosa to postpone a working visit to Saudi Arabia that was scheduled to begin Tuesday.

The loss of hundreds of lives “and thousands of homes, as well as the economic impact and the destruction of infrastructure, calls for all hands on deck,” said Ramaphosa.

The country is still struggling to recover from the COVID pandemic and deadly riots last year that killed more than 350 people, mostly in the now flood-struck southeastern region.