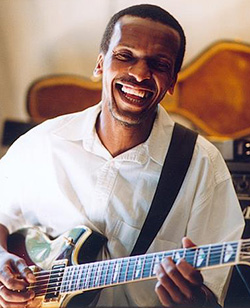 MUSICIAN, producer and weaver of magic, Louis Mhlanga, will perform at the Rainbow Restaurant in Pinetown on Sunday, 6 March.
The internationally-acclaimed musician, award-winning guitarist and producer is a South African-based Zimbabwean whose career began in the 1970s.
Fronting many bands in Zimbabwe, he mixed American and Zimbabwean influences into his music.
Mhlanga became renowned for his guitar skills and worked with Zimbabwean acts such as Shaka, Talking Drum, Ilanga, Mudzimu and Oliver Mtukudzi.
He eventually headed to South Africa to pursue different musical opportunities, leading to collaborations with renowned South African artists such as Miriam Makeba, Hugh Masekela, Ray Phiri, Sipho Mabuse, Mlungisi Gegane, and Busi Mhlongo.
His albums are timeless and his live shows leave you begging for more.
Those who have been lucky enough to see him live, will know what we are talking about. If you haven’t, now is your chance to correct this mistake and make your life richer.Advertisement