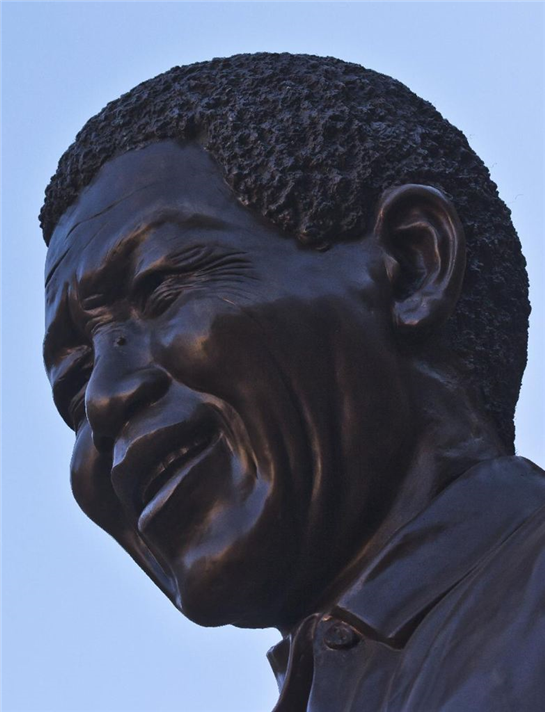 SOUTH Africans prayed, sang and fell silent on Friday to mark the first anniversary of Nelson Mandela’s death, honouring the Nobel laureate’s role in vanquishing racist white rule.
A dawn interfaith service began a sombre day of remembrance, with South Africa’s living liberation heroes gathering at the Freedom Park amphitheatre in Pretoria.
Wreaths were laid at the base of a five-metre statue of a smiling Madiba, the clan name by which South Africans affectionately call a man who is both father of the nation and their favourite son.
“The body gave in but Madiba’s spirit never, never changed, it was always the same until the end,” Mandela’s widow Graca Machel said before laying a huge ring of white flowers and pale pink roses at the base of the statue.

She then joined hands with members of Mandela’s family in prayer.
She said she was “numb” when her husband died, but she now remembers him as “tall and proud.”
US President Barack Obama also joined South Africans in paying homage to Mandela.
“As we pause today to remember the legacy of Madiba, I hope we can all take a moment to reflect on how Mandela’s life has inspired our own,” Obama said in a statement.
“While Mandela left behind a world more just and free, there is much more work to be done.”
Old comrades
During the service, bells tolled for three minutes and seven seconds — followed by three minutes of silence: a six-minute and seven-second dedication to Mandela’s 67 years of public service.
Mandela’s old comrades, rights lawyer George Bizos and Ahmed Kathrada, who was imprisoned with him on Robben Island, also paid tribute.
“I miss him not only as a political leader, I miss him as an elder brother,” said Kathrada, his voice shaking.
“When Madiba died, I asked who should I turn to. I am still looking to somebody.”
Bizos — who provided legal representation for Mandela, Kathrada and other activists charged with sabotage in the 1960s — implicitly criticised Mandela’s successors.
The 86-year-old commended the late leader’s commitment to the rule of law, saying he had “respect for our courts”. Advertisement

“He was very proud of the constitution that we put together,” Bizos told the gathering.
The veteran also used the opportunity to bemoan the high levels of corruption in the country.
“Nelson Mandela would be disappointed with some of the things that are happening in South Africa, he would be disappointed with the corruption,” said Bizos.
Mandela passed away last year at the age of 95, after a long period of illness.
He was buried on December 15 at Qunu, his ancestral rural village in the Eastern Cape region.
Fellow Nobel Peace Prize laureate Archbishop Emeritus Desmond Tutu called on South Africans to emulate Mandela’s example in a statement to mark the anniversary.
“Our obligation to Madiba is to continue to build the society he envisaged, to follow his example,” Tutu said.
“A society founded on human rights, in which all can share in the rich bounty God bestowed on our country. In which all can live in dignity, together. A society of better tomorrows for all.”
President Jacob Zuma, who is currently in China, described the anniversary as a “sad day in our country” and a day to reflect on the road travelled since the end of apartheid in 1994.
A long list of other events dedicated to Mandela were set to take place into the weekend and beyond, including a friendly cricket match, dubbed the Mandela Legacy Cup, between South Africa’s national rugby and cricket teams.
Mandela’s death was met with a worldwide outpouring of grief.
He set South Africa on a course towards reconciliation after he emerged unbowed from nearly three decades in prison in 1990 and became the country’s first president to be elected by universal suffrage in 1994.
His one-time jailer FW de Klerk, who shared the Nobel Peace Prize with Mandela in 1993, called on South Africans to honour his legacy.
“Although Nelson Mandela is no longer physically with us his legacy remains to guide us,” he said in a statement.
Ordinary South Africans, for many of whom the memory of the icon’s passing is still fresh in their minds, expressed worry about the current leadership.
“There are no heroes like Mandela,” 17-year-old Maudi Mokwena said. “Now our government is corrupt.”
Her sentiments were echoed by another youngster, Zandile Thabede, who criticised the selfishness of politicians, pointing at the $23 million (18.7 million euros) taxpayer-funded upgrades on President Zuma’s private home in Nkandla.
“Mandela focused on improving our lives, health and education, now it’s all about Nkandla,” said Thabede.