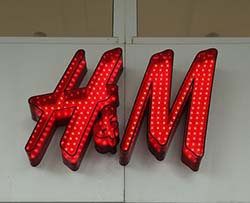 JOHANNESBURG: Members of a South African opposition party stormed into some H&M stores across the country on Saturday to protest a promotional image of a black child wearing a sweatshirt with the words “Coolest monkey in the jungle.”
Local media reports said the Economic Freedom Fighters urged shopping malls to evict the Swedish clothing retailer, which has apologized after an outcry in other countries. People have called the image racist and inappropriate.
Television footage showed clothing in one of the South African stores scattered everywhere.
H&M in South Africa says it had removed the sweatshirt from sale. “We have got this wrong and we are deeply sorry,” a message on its South African website says.
EFF leader Julius Malema said he doesn’t regret taking the action Saturday, the South African Broadcasting Corporation reported.
NBA star LeBron James, rapper Diddy and singer The Weeknd are among the celebrities who expressed shock in recent days over the H&M image, which has been removed from online promotions but continues to be circulated on social media.Advertisement