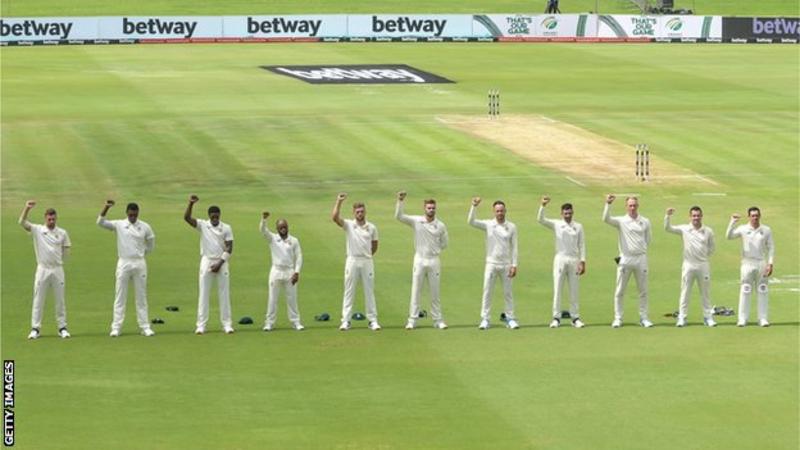 South Africa have expressed their “ongoing commitment” to supporting the Black Lives Matter movement after their players raised their fists before the first Test against Sri Lanka.

The Proteas opted not to take a knee before their limited overs matches against England last month.

Former South Africa president Nelson Mandela raised a clenched fist after his release from prison in 1990.

“The raised fist is a powerful gesture in our history,” said a team statement.

Referring to Mandela’s salute, the Proteas added it was “an acknowledgment of the struggle against apartheid” and represented a “commitment to continuing to fight for equality, justice and freedom”.

South Africa were excluded from international cricket from 1970 until 1991 because of apartheid.

Under Cricket South Africa’s (CSA) ethnic quota policy – intended to help redress imbalances created during the apartheid era – the team should contain at least two black Africans and four others from the country’s mixed-race and Indian communities.

South Africa said last month they “unanimously” decided not to take the knee before matches against England.

American football star and civil rights activist Colin Kaepernick became a symbol in the fight against racial injustice when he kneeled in protest during the United States national anthem in 2016.

Many sports teams and individuals have taken the knee in support of the Black Lives Matter movement this year following the death of George Floyd in police custody in Minneapolis and subsequent protests across the world.

Every South Africa player raised their right fist before the start of play on day one of the first Test against Sri Lanka at Centurion on Saturday.

“We continue to own our journey,” said CSA in a statement.

“We recognise that our actions will most likely result in criticism from some community, one way or another, but we work to prioritise the team, to be honest about our own learning journey and to continue to make decisions that we can own in good conscience as a team, first and foremost, and as individuals.”

The Proteas said that through a “process of deep democracy” the team had decided to raise their fists as a symbol of their “ongoing commitment” to racial equality.

They added that as Kaepernick’s gesture has a “deep significance in the USA political environment”, they have chosen one which “resonates in our South African context”, while also citing Tommie Smith and John Carlos’ Black Power Salute on the podium at the 1968 Olympics.

“We recognise the historical and political connotations of the raised fist as a gesture of ongoing solidarity in the fight for racial justice and anti-racism work,” the statement added.

“We stand together and raise our fists as a gesture of solidarity and commitment to continuing the work of pursuing racial justice in our lifetimes.”