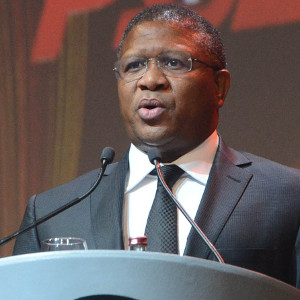 SOUTH Africa’s sports minister on Thursday denied that his country had paid a $10 million bribe to help it win the right to host the World Cup in 2010.
“South Africa did not pay any bribe nor did it illegally obtain the right to host the World Cup,” Fikile Mbalula told a news conference in Cape Town.
Soccer’s world governing body, Fifa, said on Wednesday it would seek restitution in US courts from former Fifa executive committee members who have been accused in US indictments of having accepted $10 million in bribes in return for supporting World Cup bids.
“We paid money to a legacy project in the African diaspora in the Caribbean,” Mbalula said, adding that the money had been intended for a legitimate project and had been paid to the Caribbean Football Union by Fifa on South Africa’s behalf.
“It was a resolution of the South African government, together with Fifa, to support the (African) diaspora, and that is why it is on our plate. It was our policy to support our African brothers around the world in projects based around the World Cup.”
Mbalula acknowledged that there had been no subsequent oversight of the project, which was never launched.
“We were taken aback by those developments, but we put no measures in place to follow up because the key was going to a Fifa institution.”
Fifa said former executive committee members Jack Warner, who has been banned for life but denies wrongdoing, Chuck Blazer, who has pleaded guilty to racketeering, wire fraud and money laundering, and other individuals had engineered the payoff from South Africa.
Blazer, in US court documents, said Warner, the former head of Caribbean football, had pocketed the money and only passed on a small cut to him.
Mbalula said the allegations had badly hurt “brand South Africa” and the legacy of “the most successful World Cup in Fifa’s history”.
He said he would ask to meet the new Fifa president, Gianni Infantino, in the next weeks to explain the background of Fifa’s decision to seek restitution, which he said had inflicted “reputational damage of monumental proportions on this country”.
“We did not bribe. We did everything according to the book. But if others were found to have bribed, then let them explain,” added Mbalula.
He said he wanted Fifa to retract its statement alleging that bribes had been paid.Advertisement