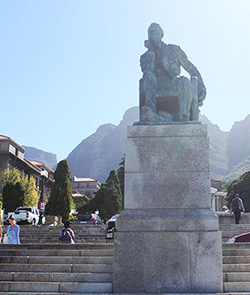 OVER the last three weeks, students, lecturers and workers at the University of Cape Town (UCT) have been demanding that management remove a statue of Cecil John Rhodes – a 19th century British colonialist whose destructive imperialist legacy is still remembered across much of Southern Africa to this day. However, the issues that have been brought up by the students in the wake of the campaign are much broader and more far-reaching than the mere removal of a statue. The “Rhodes Must Fall Campaign”, which was started by a handful of students, has mushroomed into a furious country-wide debate over the need for radical change.
The protest against the statue gained media attention when a student threw human waste at the statue. This action drew indignation from some petty-bourgeois commentators, but students began to support the protest more and more. As the demonstrations grew larger, the UCT Student Representative Council were compelled to put their full weight behind the growing “Rhodes Must Fall” movement. This served to propel the momentum of the protest even more. Mass assemblies were organised on the campus of the university. Students, workers and academics were locked in heated discussions, and a variety of views were expressed with every idea put to the test, including those of Marx, Steve Biko and Thomas Sankara.
Suddenly the management of UCT was forced to listen to the demands of the “Rhodes Must Fall” movement. Out of desperation, the hapless vice-chancellor, Max Price, told students he was in favour of the students’ demand for the removal of the statue but that the final decision can only be made by the council of the university management. This attempt to pacify the growing movement backfired. Instead, students started to occupy the Brenmar building on 20 March and renamed it Azania House.
Meanwhile, workers at the university and some lecturers also gave support for the protests. Within days demonstrations also broke out at other higher institutions of learning including at Rhodes University at Grahamstown, which carries the name of Cecil John Rhodes. In Kimberley, of the Northern Cape province, which for a long time hosted the headquarters for the giant diamond company De Beers Consolidated Mines (founded by Rhodes) calls were also made to remove symbols of Rhodes. At the University of Kwazulu-Natal, a statue of the former British King George V was also defaced. Heated discussions erupted in Wits University.Advertisement