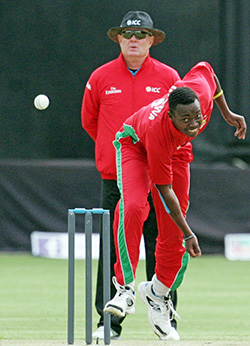 South Africa 309 for 3 (Amla 122*, de Kock 63, Nyumbu 2-52) beat Zimbabwe 216 (Masakadza 61, Phangiso 3-43) by 93 runs
HASHIM Amla’s 15th ODI hundred, his third against Zimbabwe and his fourth in six matches, led South Africa through a speedy start, sedate middle and ultimately to a sparkling finish, as the visitors took the series lead in Bulawayo.
Amla shared century stands with Quinton de Kock and Faf du Plessis, who both brought up fifties, as South Africa posted a towering 309 which Zimbabwe never realistically looked like reaching.
Although the margin of defeat suggests Zimbabwe’s downfall was with the bat, they acquitted themselves fairly well against an attack mostly made up of South Africa’s reserves. It was with the ball, however, that they lost the game.
With three rookies in their ranks, Zimbabwe’s pack lacked the pace to inject life into a slow wicket, and received no assistance from the healthy cloud covering in the morning. They could also not take proper advantage of the significant spin on offer.
As a result, when the first signs of turn were evident in the 14th over, Zimbabwe had already failed to rein South Africa in.
De Kock pounced on anything short and wide to score 42 of the 46 runs during a five-over period in which South Africa’s intent to stamp their authority was made clear.
Teenager Luke Jongwe and the spin duo of Prosper Utseya and Williams pulled South Africa back and slowed de Kock down, even though his half-century came off 42 balls.

John Nyumbu prevented de Kock from keeping his 100 percent conversion record when he offered flight and de Kock attempted to clear the offside field but found only Brendan Taylor at backward point.
With de Kock’s dismissal, Zimbabwe enforced more of a stranglehold. Amla and Faf du Plessis, batting in the No.3 spot left vacant by Jacques Kallis, managed only 58 runs, without a single boundary in the 14 overs that followed the opening stand.
Zimbabwe could have eventually claimed Amla’s wicket as a trophy for their efforts, but Shingi Masakadza put him down on 62 in his follow-through.
It took South Africa until the final over of the power-play to reignite their run-scoring flame.
Du Plessis took four boundaries off Jongwe, a slap through mid-wicket, a fortuitous edge, a loft over the covers and a drive through them – to push South Africa over the 200-run mark and help himself to a half-century off 69 balls.Advertisement

With 10 overs left to go, South Africa’s launched a final fifth assault which saw them plunder 101 runs to lift their run-rate above six. Amla was the main protagonist after du Plessis mistimed a shot he was aiming to hit over the legside, only to be caught at cover.
Although de Villiers caught the eye with a pair of inventive reverse-slog sixes, Amla was still the one holding the innings together, as he brought up his century and finished off with his own couple of big hits over long-on and sweeper cover.
Nyumbu, Shingi and Jongwe all lacked the control needed to avoid erring on a surface where the margins of mistake were small. Their lines and lengths did not challenge enough, and they were given a lesson in how they should have bowled by Kyle Abbott and Ryan McLaren.
Abbott found movement and bounce, but he also kept it tight on off stump or banged it in short and threateningly, while McLaren was equally impeccable in his disciplines.
Abbott went unrewarded, but his stranglehold helped seduce Vusi Sibanda into greeting a teasing line and length with an open-faced edge.
McLaren had Richmond Mutumbami caught behind off a short ball, and when Taylor stepped out to chip Aaron Phangiso over cover, he was caught at long-on by David Miller instead.